This muhammara recipe is a traditional Syrian recipe with roasted red peppers and walnuts. It can be used as a spread and it’s perfect as an appetizer for parties!

If you want to go straight to the recipe, just scroll down. I’ll blow off some steam first and tell you a story. 🙂

So, before showing you today’s recipe, let me just blow off some steam first. I’m getting really tired of having to deal with vegan extremists. Come on people, you are filled with aggressiveness and anger! I understand, it’s so much suffering in the world, animals are being slaughtered, you’re bothered that people are ignorant, but by having this behavior you’re doing more bad than good!

I know the situation we live in too, but unlike you, I understood that negativity will never lead to positivity! Never! So stop annoying your Facebook friends by posting horrendous images with slaughtered animals, and start posting happy stuff, lively, free animal photos, delicious vegan foods, and even health tips! This is the way you encourage others to be interested in veganism.

I am curious, how many of you (and here I’m referring to the vegan extremists mentioned above) converted at least one person to vegetarianism/veganism?I doubt that you did. I’m not bragging, not at all, but I succeeded in converting 5 people so far to vegetarianism. And from that to veganism is just a small step. Do you think that I achieved that with an aggressive behavior? Not at all. Do you think that I forced my beliefs on them? No. I just informed them. That was it. I showed them the positive stuff and not the bad parts. That’s what matters most. Stop making people feel guilty (even if we know they are) and start having a positive attitude!

Let’s leave all labels aside. Vegans, non-vegans, vegetarians, lactovegetarians etc. IT DOESN’T MATTER! What matters is that we change and help others change. ANY good change, no matter how small it is, is appreciated! So stop with the stupid affirmations such as “Vegetarians are worse than omnivores!” or “You ate honey, you must be shot to the wall!”. I can’t even believe how some people can think like that. I’d rather live in a vegetarian world where people eat dairy, eggs and honey, than in the world we’re living now! The planet will be a happier place.

So now that I’m not pissed off anymore, let’s talk about the muhammara recipe here… 🙂 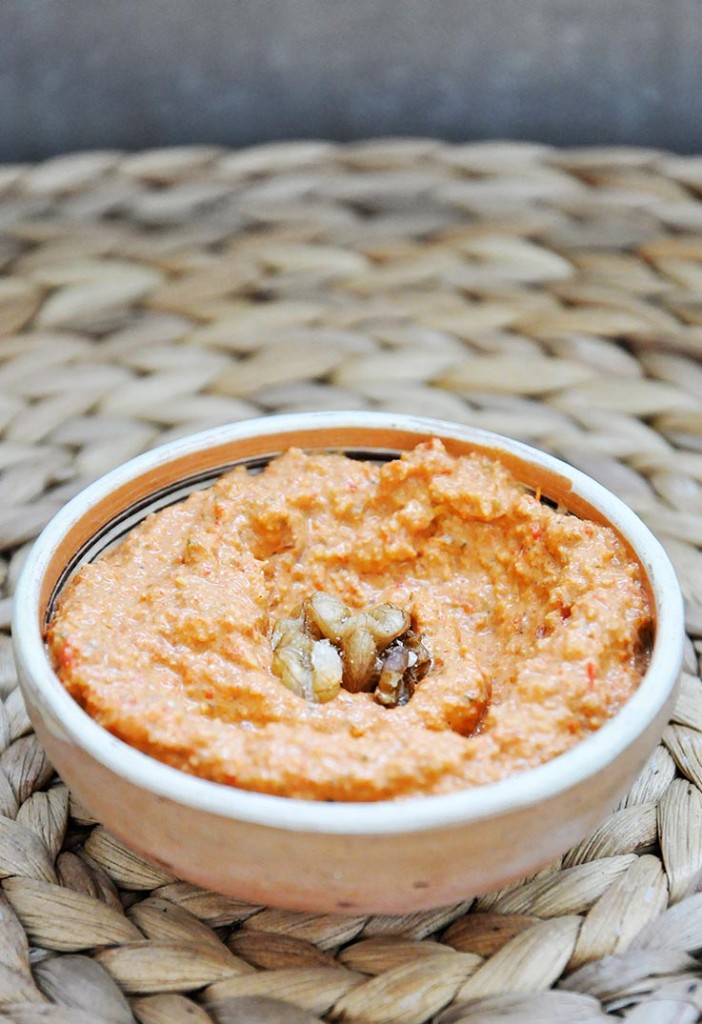 Muhammara is a traditional Middle Eastern recipe and comes in different versions with minor changes depending on the region (there is Turkish muhammara, Lebanese muhammara, Syrian muhammara, Armenian muhammara, and so on). I found out about this muhammara dip while searching the web for some oriental appetizer recipes, similar to hummus and baba ganoush. I didn’t use all the ingredients in the authentic muhammara recipe because some are pretty impossible to find here. Also, I didn’t add any breadcrumbs. I tasted it and loved it just the way it was. Anyway, the result was aaaamaaaazing!

This muhammara recipe is so much different than the spreads recipes I’m used too. It has a lovely sweet and nutty flavor, the color is vibrant and the texture is really good too. I will definitely make this again! I tried it at a local Lebanese restaurant but I think that my version is by far the best muhammara recipe I’ve tasted so far.

One more tip before showing you this muhammara recipe, you have to be very careful with the walnuts you use. Check them twice, or even triple check for any bits of hard parts. You don’t want to ruin your teeth now, don’t you? 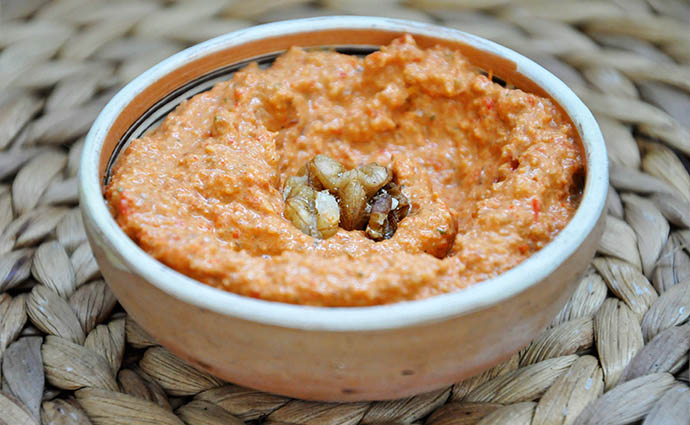 Thank you for your rant and for the recipe. I am vegan, and wasn't for a long time because the word "vegan" conjured up anger and self-rightousness. Showing kindness and compassion towards animals, but not humans speaks mostly to some "issues" that some people may have from their past. People become vegan when they are ready to do so. “When you express your anger, either verbally or with physical violence, you are feeding the seed of anger, and it becomes stronger in you.” Only understanding and compassion can neutralize anger.

Exactly! Anger and hatred will NEVER bring anything good. I hope more people would understand this...

You have a lovely blog and this is my first visit. I wholeheartedly agree with your staying positive over the negative. I would like to go a step further and say after 60 years of learning and growing, that everything is alive. We may believe that because we are vegan, or vegetarian, that we can exempt ourselves, but the truth is, everything is alive...the salad you eat...the grains...the fruit...until it is picked or plucked from the ground... If, when we sit down before our meal, we are not aware of this fact, we do not honor that life; animal or plant based, etc. Take good care everyone. Namaste. Teresa

Such lovely and truthful words you said! Thank you for your message! :D

Not only I love your recipes, I also like your attitude! I have been thinking together with my husband to become vegetarian, and, if possible vegan. I've found is not an easy thing to change eating habits when we are not educated about our choices and what is healthy for each one of us. Finding your website has been such a relief, since is not easy to find both delicious and healthy recipes. I want to thank you so much for investing your time and energy into this blog. Thanks, thanks, thanks!

Thank you, Alejandra! Your comment made my day. :D It makes me so happy to hear that my work is appreciated and that my recipes help other people too. THANK YOU! :D

This recipe looks amazing. I love that there are plenty of vegan Middle Eastern recipes. I agree with your approach to veganism. I try to show my friends and family how good vegan food is. I hope to inspire them to at least not eat as much meat. It isn't likely I will change their minds completely but I am grateful how they are very supportive of my beliefs,

Thanks Jessie! Exactly! This is the best way to do it. We must encourage people to do their own research and make the change because they feel that's the right thing to do.