Try these vegan minced meat rolls for your next picnic or vegan barbecue and impress even your non-vegan friends! This popular Romanian recipe turned vegan will surely become your favorite!

This is not the first time I try to make a vegan version of the popular Romanian “mititei” recipe. I’ve made this over and over and every time I tried a new technique or a new ingredient in order to make it even better. I think I have finally discovered the perfect recipe for these vegan minced meat rolls so it’s time to share it with you! 🙂

You can see it in the video below too, though I only filmed the grilling part and not the step by step preparation. In case you need any clarifications, feel free to drop me a message! 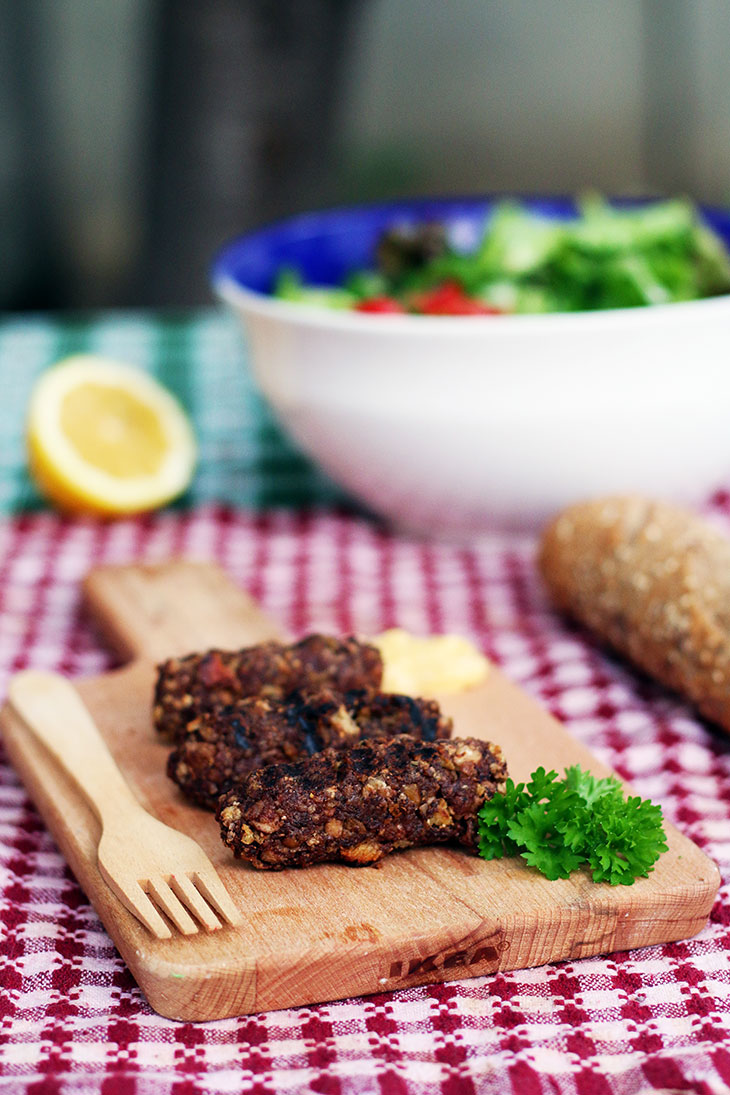 The traditional “mititei” recipe is made with ground pork and beef and in some cases even lamb. Other than these, all the other ingredients are vegan, so the challenge was to find a good replacement for minced meat. I wanted to use a vegan substitute that would have the same texture as ground meat, so, obviously, I use textured soy protein granules which are a pretty amazing minced meat substitute (check them out in my vegan Bolognese recipe too!).

The first time I made these vegan minced meat rolls, I used the recipe below without any tofu, oil or the dry TSP granules added later to the mix. It tasted good, but it was too chewy. So I decided to improve it.

The second time I had the idea of soaking only half of the TSP granules in hot water and add the other half later so that the texture will improve. I was right. It improved a lot, but still, something was missing! They were too dry! The traditional minced meat rolls are quite fatty and this is what makes them so good, so I decided to add two more ingredients to the mix.

The third time I made these vegan minced meat rolls, they turned out just perfect! To mimic the fat pieces in the original recipe, as well as making these moister, I used tofu bits and some extra oil in the composition. The result was exactly what I have hoped for. I honestly believe this is the best vegan minced meat rolls recipe you can make! 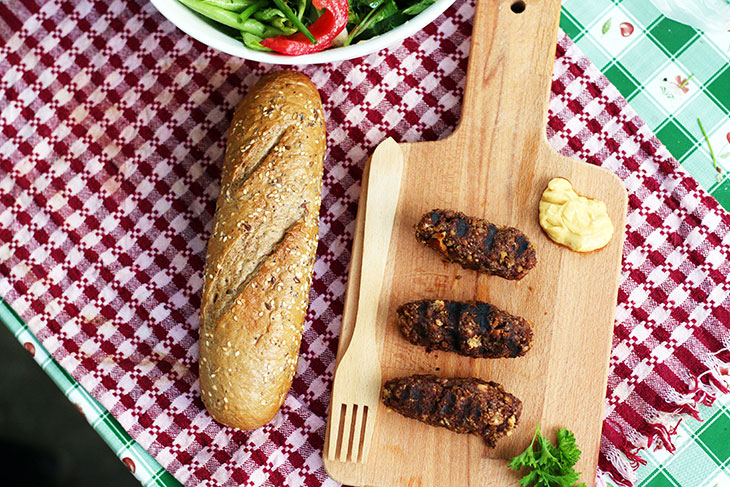 You can either grill these or lightly fry them. Don’t forget to brush them with some oil before cooking, so they won’t stick to the grill or the pan. You can serve them with a side of fries, mashed potatoes, salad and of course, mustard! You can eat these without mustard! 🙂

If you want you can even make these in a larger batch and simply freeze them. You can defrost them whenever you feel like eating vegan minced meat rolls again.

Hope you’ll like this Romanian recipe turned vegan! Leave me a comment below to let me know how it was! 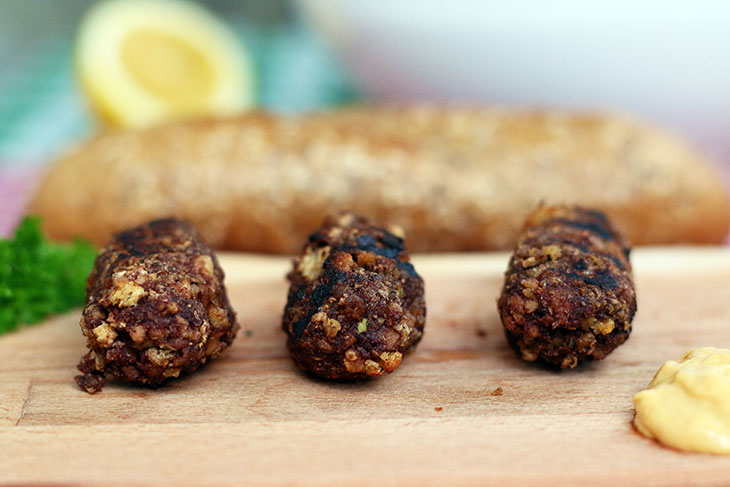 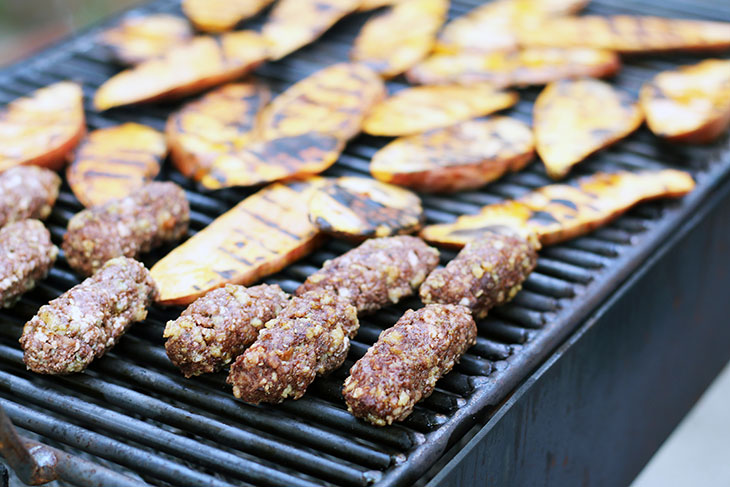 Can you check your ingredient list. You left out the name of the ingredients showing just quantities.I would really appreciate!

In Vietnam, when we make fake sausage, we use extra oil and large tapioca bubbles to mimic the fat in the meat. Works especially well when making a mortadella type sausage.

Extraordinary taste! These rolls are some of the very few things I still miss due to being vegan, but now I was really able to enjoy the flavours and texture the way I remember them from over 15 years ago, before i stopped eating meat. You are a true magician, Ruxandra! :)

Thank you, Alina! So happy you liked them! You should try my vegan steak as well and I am currently posting some vegan bacon recipes. Hope they'll remind you of the real thing as well. :D

Surprinsingly good! I bet these are so much better than the meat version. Extremely flavorful and easy to make!

Glad you liked it!

Made these for bbq today - they are delicious, thank you for sharing this recipe! Even meat eaters enjoyed them. The only thing is that it was difficult to make the mince stick together, and the rolls were quite fragile and a couple fell apart on the bbq. I have a lot of mince left too as the recipe makes lots, so am looking forward to making these again tomorrow and perhaps frying or baking in the oven, and maybe they stick better together after being overnight in the fridge. I was tempted to add an egg to make them stick together better, but then they wouldn't be vegan. Thanks again! Love your recipes - tried a few and always a success!

Yay! :D Next time you make these, leave them in the fridge for 30 minutes before shaping and grilling them. When I grill them on a pan I usually cook them right away and they're ok, but on a BBQ grill, I always let them sit in the fridge for a while so that the composition gets extra-sticky. Don't add eggs. I did this once because I didn't have any psyllium husks and it was a mess. Add more psyllium if you want or even some flour but don't overdo it because they will get gummy. So happy to hear you like my recipes! :D Thank you, Elina!