I never thought a pumpkin smoothie can be so good! I just recently started drinking smoothies for breakfast and I am absolutely in love with them! They’re so filling and tasty, and when I know they’re also packed with valuable nutrients, they make me feel even better 🙂

Here’s the healthy smoothies I made so far: “Fiber Boom!” Banana Breakfast Smoothie, Immunity Booster Green Smoothie and Summer Watermelon & Oranges Smoothie. I’m also planning to make soon a protein smoothie, perfect for those of you who are working out and Vitamin C smoothie, filled with lots of delicious, high in Vit. C ingredients.

About this antioxidant pumpkin smoothie…I almost forgot that I had some frozen pumpkin in the fridge but my mom reminded me yesterday. So, today I decided to skip my all time favorite banana smoothie and try something new. It was amazing!!! Really! I’m not bragging, but you have to try it and see it yourself. It’s like eating pumpkin pie! It’s sweet, refreshing and gives you an instant energy rush! 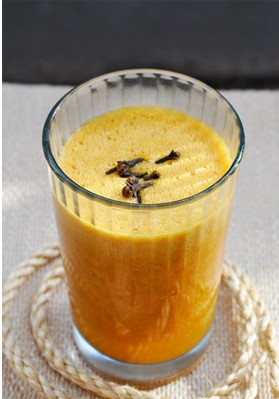 Pumpkin fruit is incredibly rich in vital antioxidants, and vitamins. It is very low calorie: 100 g fruit provides just 26 calories; however, it is rich in dietary fiber, anti-oxidants, minerals, vitamins. With 7384 mg per 100 g, pumpkin has very high levels of vitamin-A, providing about 246% of RDA. Vitamin A is a powerful natural anti-oxidant and is required by the body for maintaining the integrity of skin and mucous membranes. It is also an essential vitamin for good visual sight.

Numerous studies show that cinnamon regulates blood sugar, making it a great choice for diabetics and hypoglycemics. It reduces LDL cholesterol levels. It has natural anti-infectious compounds. Cinnamon is effective against ulcer-causing H. pylori bacteria and other pathogens. It helps you lose weight and has amazing anti-cancer properties.

Clove is a natural antiviral, antimicrobial, antiseptic, and anti-fungal agent. It also holds aphrodisiac and circulation-stimulating capacities.The oil of cloves has been used in a variety of health conditions including indigestion, generalized stress, parasitic infestations, cough, toothaches, headaches, and blood impurities. It is also great for skin problems such as acne. Cloves can effectively cure many digestive problems such as flatulence, loose stools, indigestion, and nausea.

Green tea has a multitude of uses from lowering blood pressure to preventing cancer. Green tea increases the metabolism. The polyphenol found in green tea works to intensify levels of fat oxidation and the rate at which your body turns food into calories. It also helps regulate glucose levels. Green tea reduces bad cholesterol in the blood and improves the ratio of good cholesterol to bad cholesterol. It can apparently also help with wrinkles and the signs of aging.

Ginger aids digestion as it increases saliva and other digestive fluids, alleviating indigestion and associated problems such as flatulence. It is known to relieve nausea and morning sickness. Ginger also has anti-inflammatory qualities that relieve swelling and pain. As a tea, it eases headaches and sore throats and cures colds.

Turmeric is an orange-colored Indian spice. Turmeric’s powerful antioxidant properties fight cancer-causing free radicals and it is also one of the most potent natural anti-inflammatories available. Turmeric is a natural liver detoxifier and painkiller and speeds up wound healing and assists in remodeling of damaged skin.

It has been demonstrated that Ganoderma boosts immunity and fights the proliferation of cancer cells. It also promotes blood flow and lowers oxygen consumption in the muscle of the heart. Ganoderma is a potent source of antioxidants and acts as a liver protectant.

Here’s how I made this antioxidant pumpkin smoothie! 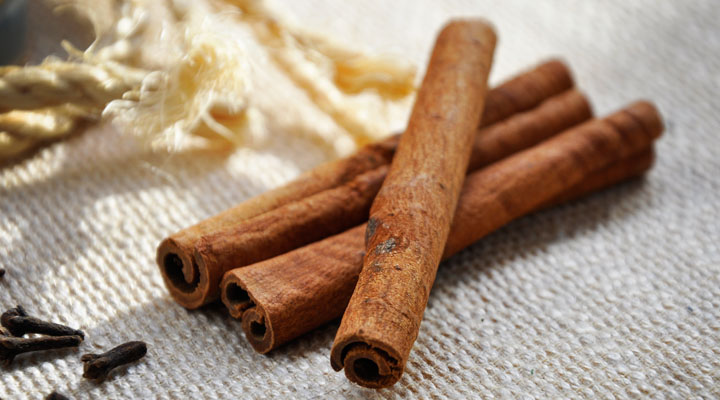 Ever since I found this recipe I always keep some roasted pumpkin in my freezer. Amazing smoothie!! :)

Thank you! :) Glad you liked the recipe!

Never saw pumpkin used in a smoothie ..excited to try this recipe , thanks.

You're welcome! It's delicious! :D

Too strong in spices! I could not drink it. I felt myself getting heartburn after a couple of swallows. Very disappointed. What is meant by "ginger powder"? Is it the same as ground ginger? That's what I used, but I didn't really know how much to use. The recipe reads "2 g", yet all other spices were measured in tsp's. How much tea in ounces? Maybe I missed just messed it up. :(

Hey! So sorry to hear this. I think you may have put too much of each. The quantities in the recipe are for 2 people. So if you want to make it for 1, just use half. 2g of ginger powder is just a pinch. You barely even notice it.

Yea! I love the internet ! I had no idea pumpkin could be used raw. Also I am going to try an Indonesian stir fry I also found on the internet.

Yes! I always keep some raw pumpkin cubes in the freezer, packed in ziplocs in 1-2 smoothie portions.

Wait a sec... You can eat pumpkin raw !? What does it taste like? I am so excited to try this recipe.

Yes! :D It's just as good as cooked pumpkin and has the same taste. Next time you buy pumpkin, just peel it, cut it in 4cm cubes and store in a plastic bag in the freezer. You can use it in smoothies and even ice creams :D