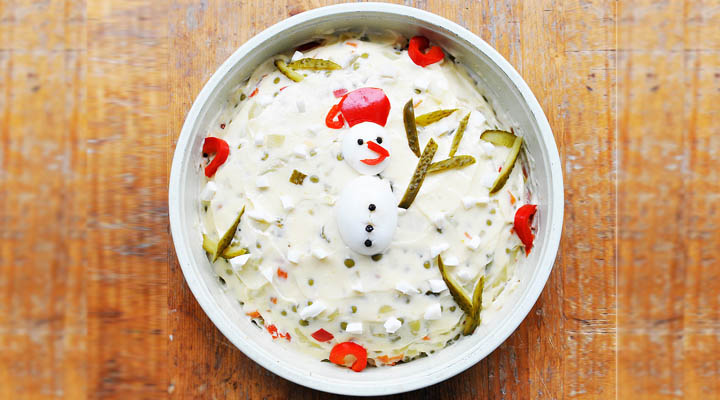 This is Russian inspired salad is called A La Russe salad, also known by its French name – Olivier Salad. This is the vegan version of the Boeuf Salad.

This is a special recipe for me because I only eat this salad once a year! It’s a tradition for us Romanians to make this salad on Christmas and New Year’s Eve. The traditional Boeuf Salad is usually prepared here during the holidays. The A La Russe salad version is usually made without meat and can be easily veganized by using no eggs and vegan mayo.

I’m not a fan of mayo and I tried to make this salad as healthy as possible. The sour flavor of pickles blends perfectly with the sweetness of the corn, carrots and potatoes.

I hope you like this simple and easy world-known recipe – now made healthy!

5.0 from 1 reviews
Vegan, Low Fat “A La Russe” / Olivier Salad
Print
Prep time
15 mins
Cook time
20 mins
Total time
35 mins
This is Russian inspired salad is called A La Russe salad, also known by its French name - Olivier Salad. This is the vegan version of the Boeuf Salad.
Author: Ruxandra Micu
Recipe type: Salad
Cuisine: Russian
Serves: 10
Ingredients
Instructions
Notes
I don’t know the exact quantities for pickles; add as much as you like.. Also, save some for decorating the salad.
If you want you can replace the lemon’s juice, mustard and oil with mayo.
*I used an egg to decorate but you can use pickles or bell pepper if you’re vegan. The recipe is egg-free.
3.2.2925
Have you tried this vegan, low fat salad? Let me know in the comments section, below.
Previous PostNext Post