A glass of red wine accompanied by cheese and baguette. Yes, that’s quintessentially French cuisine that has won the hearts of millions of people across the world. However, there is more to French food than wine and cheese. What makes French cuisine so special is the passion behind it. French people are proud of their culture, food, and heritage. They have preserved the authentic way of cooking food which makes the cuisine all the more appealing.

French cuisine – how the world sees it

French cuisine is associated with romanticism. Talk about candle-lit dinners, anniversary feasts and making any occasion special with drinks and food and what comes to your mind is French food. The world’s finest wines are from France, so are cheeses and soufflé. From soups to bread, from stews to cakes, there are so many dishes to satiate the global palette.

With so much to offer, no wonder French cuisine is the most loved cuisine of the world. From the alleys of Paris, Rennes, Bordeaux, and Nice, French cuisine has traveled far and wide. Today, you can find restaurants serving the most popular French food in New York, Taiwan, Shanghai and Sao Paolo.

Let us take a gastronomical journey and discover the subtlety of French cuisine and what makes it so popular. 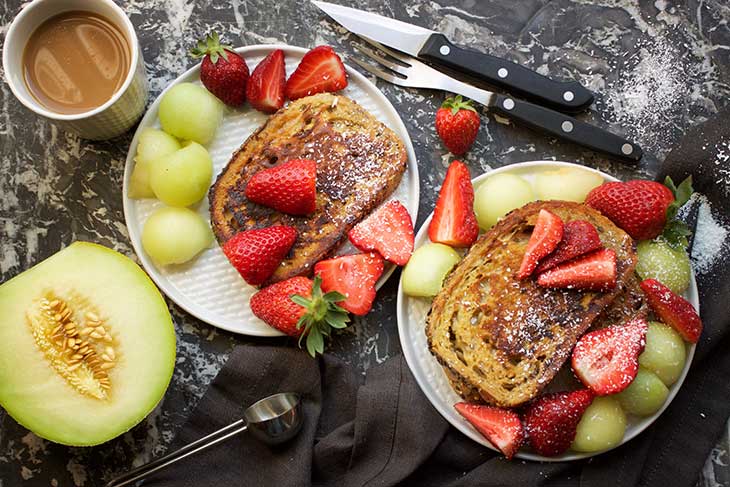 French cuisine – the history and tradition

It’s all about combining different ingredients that bring out the rich and natural flavor of each of them. French cuisine sounds fancy but in reality, it is simple. It involves using basic techniques to layer the flavors and savoring them in every bite.

A lot of history is associated with French dishes. Most of the popular French dishes are traditional and can be traced back to medieval times when banquets were common amongst the aristocracy. Pies were a common item like cheese and wine. Fresh and local ingredients play a vital role in bringing out the authentic taste of the French dishes. Previously also the ingredients varied with the seasons. In summer, spring, and autumn, people enjoyed abundant meals prepared from the fresh produce while in winter the meals became sparse. Apart from taste, the presentation of the items was very important. Still today, you would find French chefs presenting their dishes exotically.

A French meal typically has three courses, a starter, main dish, and dessert. Soups are popular as starters while the main dish may vary with region and choice. Cheese and fruit are commonly served as the dessert. Thus, you get to enjoy a plethora of flavors with each one unfolding before yourself. What makes dining so memorable is the way food is served and people sit around a table and enjoy them. 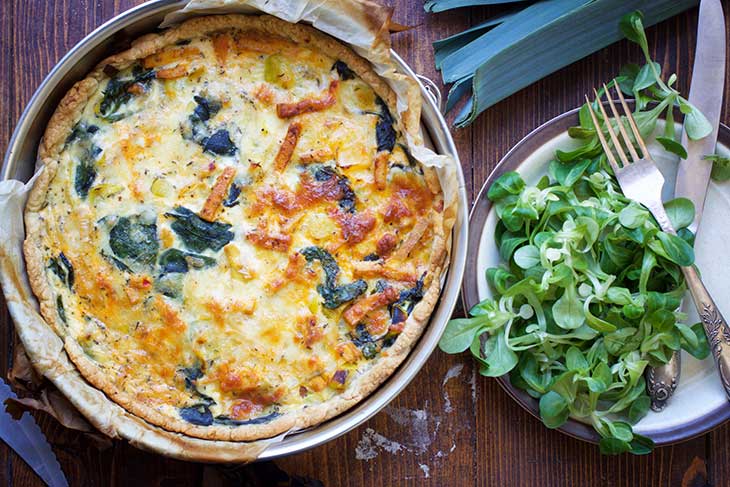 The most popular French recipes

There are several signature French dishes that require no introduction. Like the French cheese and wine, they are celebrated all over the world. Let me introduce you to these dishes so that next time when you feel like trying French cuisine, you know what to order. You will also find some suggestions for the best vegetarian french food recipes you can try.

Let’s talk about cheese and wine a little more as France offers an incredible variety of them that you would love to try. If you happen to visit France, don’t forget to travel to Burgundy. Strong, mild, fresh or anything you have on your mind, you can taste it here. Pair the cheese with your favorite wine and you would know why French are known as foodies.

The cuisine varies between different regions which add plenty of variety to the cuisine. In northwest France, crepes ( a type of pancakes) are the main dish. They’re served with cider. Far Breton, Kig ha farz and Poulet a la bretonne are famous dishes of this region.

In the Alsace region, a dish called la choucroute is very popular which is made from cabbage and sausage. Other dishes popular in this region are Carpe frites, Knack, Spatzle, and Presskopf. Actually, the cuisine of Alsace is heavily influenced by Germany and hence depends on sausages. Over half of the French beer is produced in this region.

The baguette is the most common bread enjoyed in France. It is a thin loaf of crusty bread that is enjoyed in different forms like as sandwiches. Melted cheese over baguette is an integral part of the French meal. Ficelle, Fougasse, and croissant are other bread items that are popular in France. 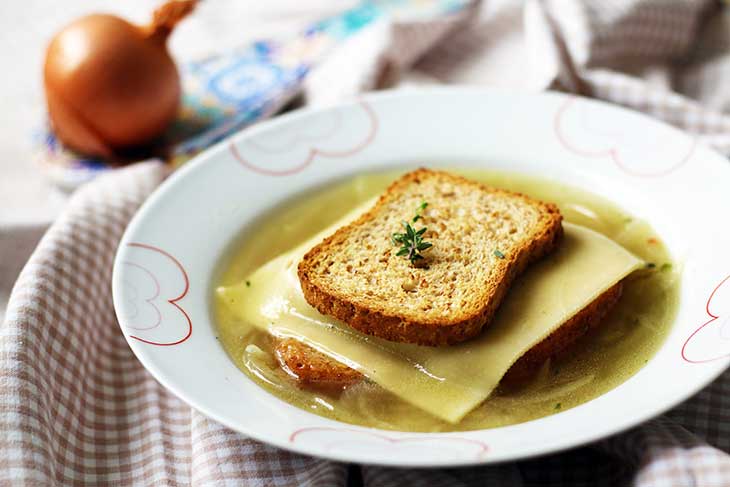 Soups are quite popular in France with l’Oignon Gratinee or onion soup taking away the prize. Coq Au Vin is perhaps the most popular French dish made with chicken and wine. The recipe varies with the region but the taste remains the same – tempting.

You must have heard about Ratatouille. It originated in French Riviera and is a type of stew with a lot of vegetables of which tomato is the main ingredient. Vegetables like zucchini, eggplant, bell peppers, garlic, onion and other herbs add their own flavor to make this stew very tasty.

Salads. French love their salads too. Nicoise salad is from Provence region, which can be enjoyed as a side dish or as a meal. With lettuce, canned tuna, boiled eggs, and fresh tomatoes, it is filling and good for your taste buds too. 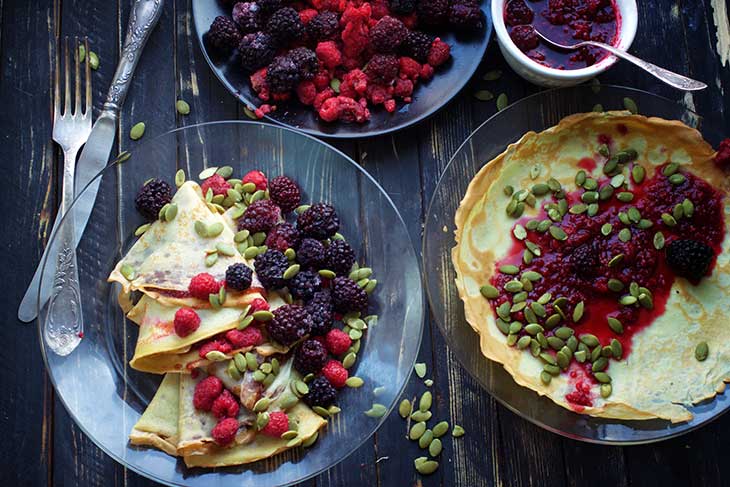 Come to desserts and you are really spoilt for choice. Clafoutis, Éclair, Macarons, and Crème Brulee are a few dessert items that deserve special mention.

Tarte Tatin is one such dish that is made of apple and pastry base. It is a delicious dessert that you must try.

If you are already getting hungry, we would end here but not without mentioning chocolate soufflé. Today, it features in dessert menus all over the world but you must appreciate that it originated in France. It derives its name from the French word puff or breath. It is eaten as savory or sweet nowadays in France. 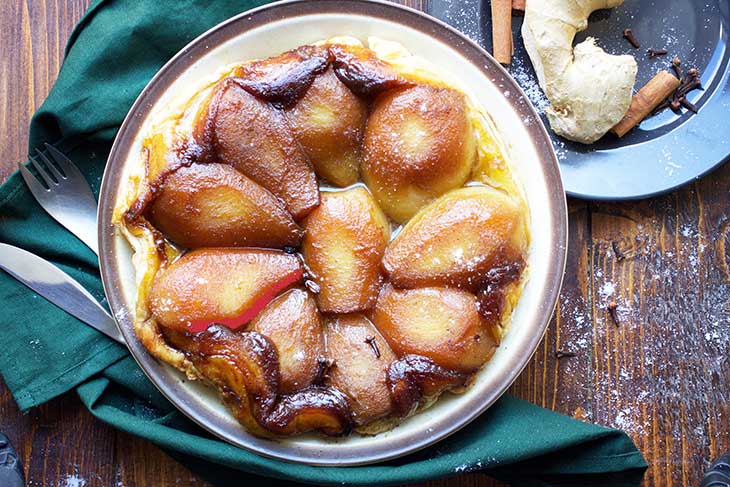 French dishes look and taste amazing. You would be surprised that the secret behind the dishes is simple ingredients that are used in a variety of techniques to create the tasty dishes.

In French cooking, you would never find a lot of seasoning or salt. The dishes are prepared by combining complementary flavors. Thus, you would find seafood being paired with lemon, potato with cheese and so on and so forth.

One distinctive feature of French cooking is that it relies on local produce. You would find people buying fresh cheese and poultry from the market. Only locally produced vegetables are used in the dishes which make them so tasty. This is also the reason behind the cuisine varying between regions. Each part of France has its own vegetables and fruits and cheese that go into creating its own cuisine. However, there are a few items that are common across the country although the cooking method may differ a little along with the ingredients. 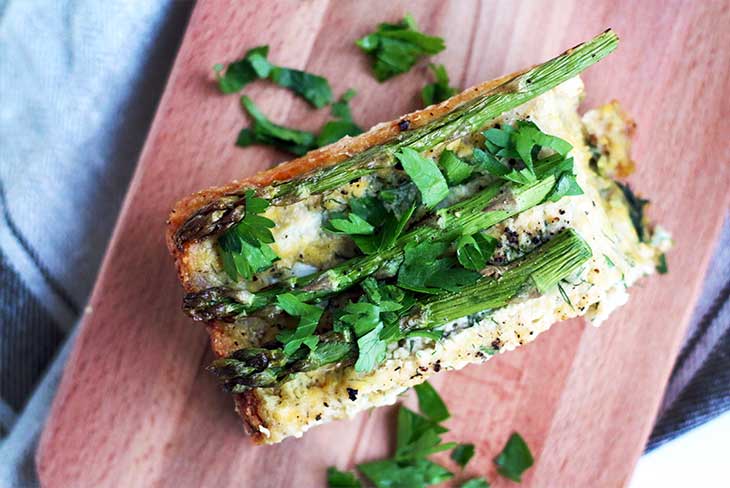 Bread forms an integral part of the French meals. Butter is used in cooking and baking a lot. Next comes cheese. It is presented as a separate course and you need to know them to enjoy them.

The other ingredients that chefs swear by include Fleur de sel. This is a type of sea salt. It is used as a finishing salt to bring out the taste of the vegetables and fishes.

Olive oil, mustard, red wine vinegar and white wine vinegar are commonly used to dress salads. French chefs depend on wine to add taste to a number of dishes.

Another staple of French kitchen is leeks. The slightly oniony vegetable adds a distinctive taste to the French dishes. An herb, Tarragon is used mainly in chicken dishes.

When the whole world is going against fat, the French remain loyal to their butter and cheese. Most French dishes are cooked in butter and yet the rate of heart diseases and obesity is low here. The secret lies in using fresh produce and using fat in moderation. 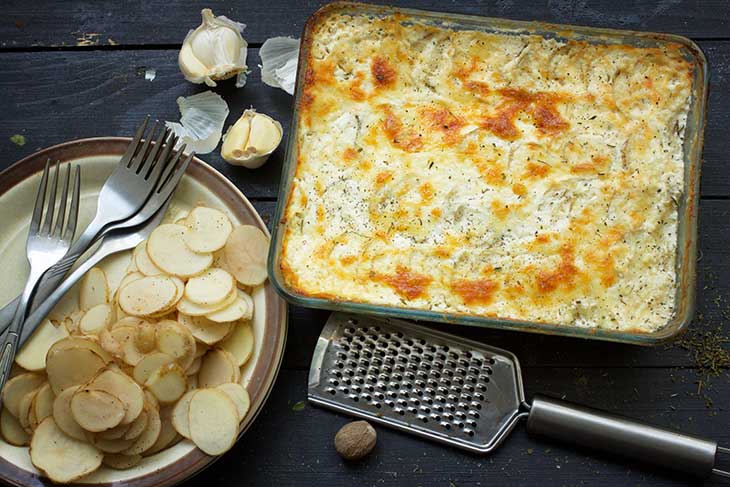 French cooking – what makes the cuisine so delicious

French cooking is something that every chef wants to learn. It involves logic, technique, and ingredients that combine together in the right amount to prepare delicious dishes. The French cooking involves a few unique methods that you may want to learn.

Braising is one such method which is used to cook tough cuts of meat by using dry and moist heat. In this method, high heat is applied to seal in the juices.

Flambéing, as the name suggests is the technique in which flames are used to cook the food. It involves adding alcohol to the pan to create flames that are immediately died down. Through this method, more flavors are added to the dishes. Coq au vin and banana foster are prepared through this technique. 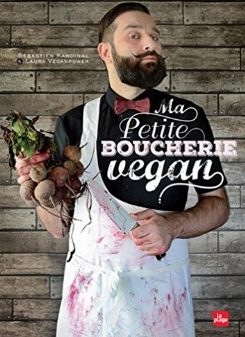 Grilling is used a lot to prepare French delicacies. Apart from it, broiling, another technique in which heat is applied from above is also used. Barbecuing and smoking are two other variations that chefs resort to.

Poaching – who can forget poached eggs? We must thank the French people for gifting us with this delicacy. So, next time when you poach an egg, think yourself as an expert French chef.

Sautéing is another technique that originated in France. In this method, food is cooked over high heat by tossing and turning the ingredients. Sautéing is responsible for retaining the natural flavor texture of the ingredients which is a salient feature of French cuisine.

Vegetarian fare in the French cuisine

It is true that French love their chicken, duck, and beef. However, that doesn’t mean they ignore the veggies. In fact, there are a number of veggie dishes that you can die for. We have already mentioned Ratatouille. It is s veggie stew that was a staple of poor man but today has found its place in the menu of the top fine dining French restaurants. It is a simple dish made with a variety of veggies which are added to the caramelized onion. All the individual ingredients lend their flavor to make this dish one of the iconic dishes of French gastronomy.

Then come the classic Roquefort and caramelized onion tart. The dish is as tasty as the name sounds. It is a dish that exposes your taste buds to a medley of tastes that you would remember long.

Moreover, the dish is versatile and can be enjoyed for lunch, dinner or as a quick meal.

Cauliflower gratin is a simple dish that uses cauliflower and covers it in white sauce and grilled for the mouth-watering taste.

You must have heard about Bastille Day celebrations. Gougeres form a part of the special meal served on this day. These are cheese puffs, small and delicate. Generally eaten with Pastis aperitif, they taste too good.

Spinach soufflé – what an exotic way to enjoy spinach and give your body its goodness. In France, it is prepared to use up the fresh harvest of spinach that the farmers bring in the market.

Frites are actually French fries but with a twist. Seasoned with truffle oil and dusted with parmesan cheese, try stopping at one. No one can win this challenge, take my word.

Romantic, mystic, still immersed in history and culture, you may find France totally out-of-the-world. It is true. As a country, France stands apart and when it comes to its food, you really need to appreciate its spirit. When the entire world is eating on the go or grabbing a quick bite, the French would savor their food at leisure. The cities shut down for lunch as the clock hits noon. In France, every meal is a celebration, to be enjoyed slowly, savoring every bite along with good company.

So, next time when you order French dishes, don’t forget to get in the mood. Otherwise, you won’t be able to do justice to the most famous cuisine of the world.