Apple Pie is a classic American dessert loved all over the world! Here’s how to make a delicious vegan apple pie that preserves the authentic flavors of the American apple pie recipe.

The world-famous American apple pie is a beloved, homey dessert and comfort food that has enchanted entire generations of family meals, picnics, Thanksgiving or Christmas dinners. An apple pie, as the name suggests, is a pie or a tart in which the main ingredients for the filling are apples, with occasional additions such as ice cream or whipped cream on top, for serving (which even has a name of its own – “apple pie a la mode”), or, a bit more uncommon, with cheddar cheese. Cheddar apple pie is very popular in the American Midwest and New England, especially in Vermont, where this unique combination with sharp cheddar is actually considered to be the state dish.

The original American apple pie is super easy to make! The apple filling is covered with delicious pastry on top and bottom, known as “double crust pie”. One exception is the open-face French-cuisine-inspired Tarte Tatin, or deep-dish apple pie. It is not uncommon to also bake the bottom of the pie first, and then adding the apple filling and baking the whole pie in order to maintain a nicely textured, crispy tart that will contain all the flavors of the American cuisine. 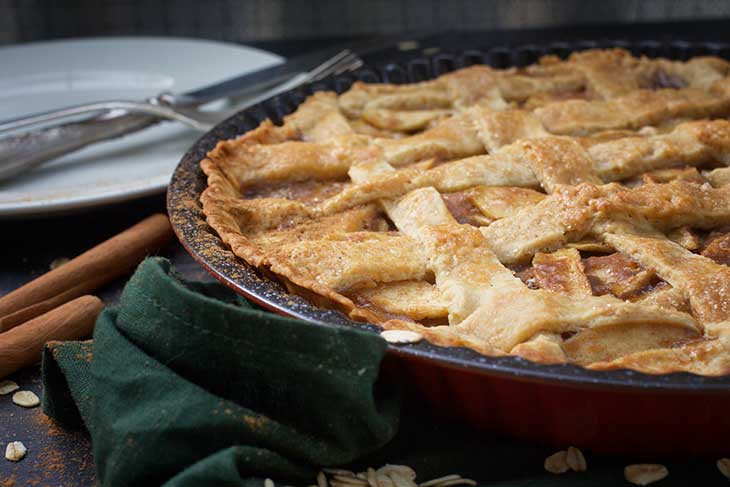 Of course, the filling is the special part that makes the apple pie truly American. The filling varies from the type of apples used (the most popular being Braeburn, Brampley, Cortland, Empire, Gala and Granny Smith, among many others) to the spices they are combined with.

The different types of apples can change the final texture of the filling and the cooking time, but it is debatable whether that affects the flavor as well. The most commonly used spices are the wonderful, autumnal cinnamon, butter, salt and, of course, sugar! Though the older recipes didn’t include sugar due to its price, most people definitely include it today, among other flavourful spices like nutmeg or cloves. 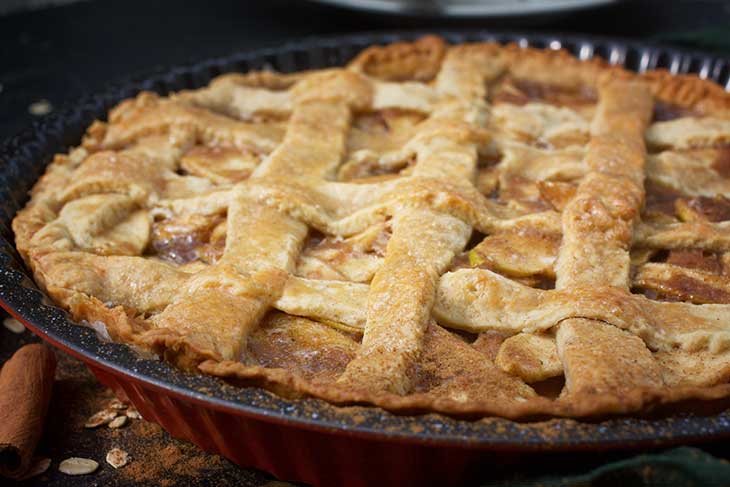 The origins of the apple pie date back to the 17th and 18th centuries, when this amazing dessert was brought to America by British, Dutch and Swedish colonists. It took a while for the European apple varieties to grow into real fruit-bearing trees as there were no suitable native apples on those lands (except small, hard and sour crabapples). Until apples were available, colonists made their pie fillings with meat, and the initial use of the first local apples was for cider. 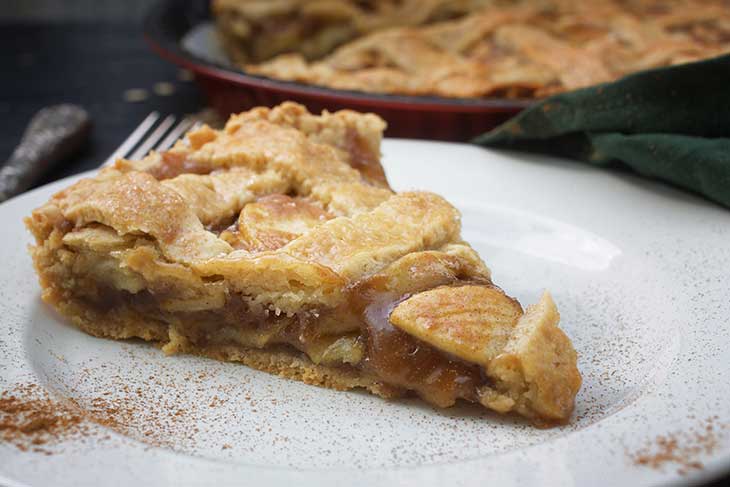 You can even find documented 18th-century authentic American apple pie recipes, both in manuscript and print, and historians document it to be one of the favorite evening meals for children. In the old times, the apple pie could even be baked with dried apples when it was no longer the season for fresh ones. Ever since then, the apple pie has only become more and more popular and Americans love it so much, they consider it to be one of the trademarks of their country! 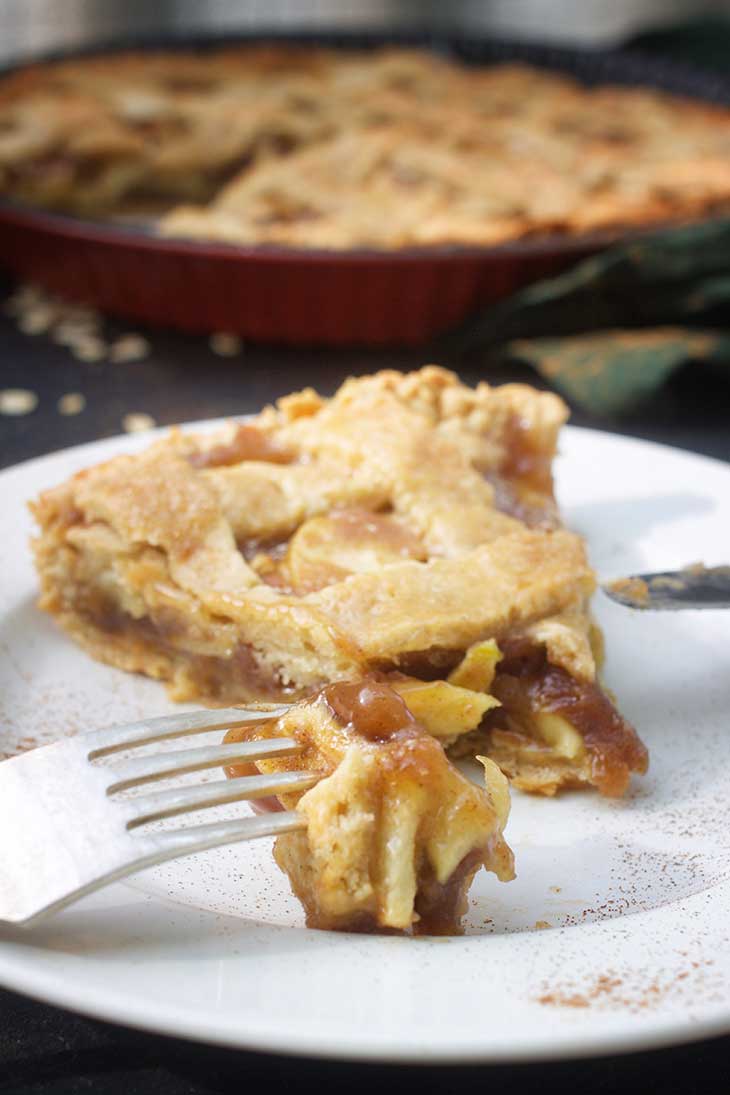 Despite its true European origins, the apple pie has found a home in the hearts of Americans and nowadays the phrase “as American as apple pie” is used to describe something typically American. Throughout the past two centuries, apple pie has become a national symbol of prosperity, and during World War II American soldiers commemorated the dish by commonly answering “for Mom and apple pie” when asked why are they going to war, which truly shows, I think, the love for this delicious dish! 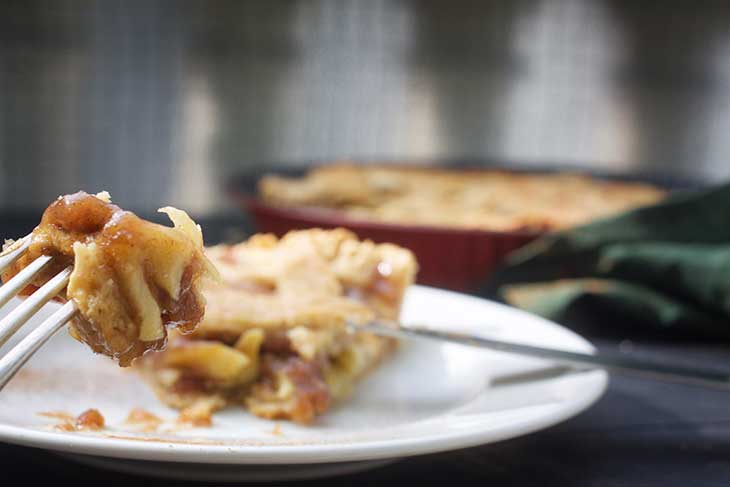 Now that I convinced you how incredibly amazing and definitely American apple pie is, let’s see how I transformed the traditional recipe into its vegan version, using green apples for the filling and vegan butter for the homemade dough! I tried to keep the recipe as simple as the real deal, so I’m sure anyone can make it at home! 🙂 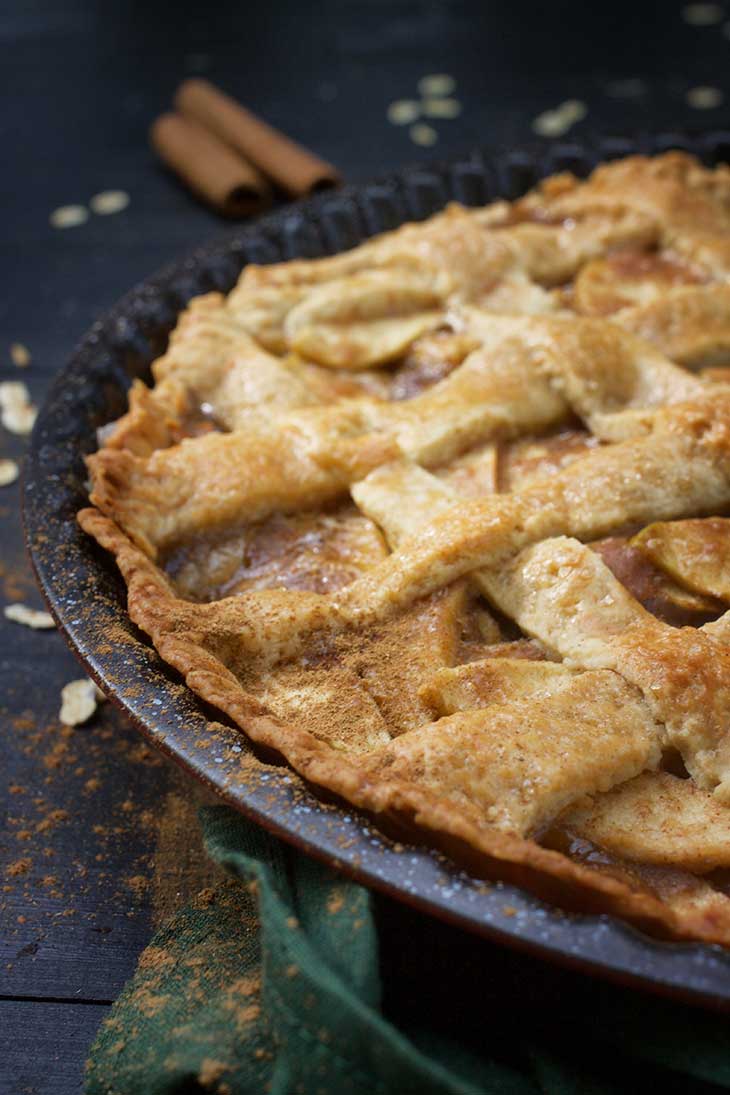 My favorite dessert ever!! I'm so happy I could make the vegan one now that I switched to this diet and your recipe is extremely delicious!