Recipes with coconut or coconut – the tree of life

In this recipe collection, you will discover all about coconut and the forms under which it can be used: coconut sugar, coconut milk, coconut oil, coconut cream or grated coconut.

Every piece of the coconut can be used? As a result, the coconut (also called the “Tree of Life”) can be used to produce beverages, fiber, food, fuel, utensils, musical instruments and more.

During World War II and the Vietnam war, when the intravenous solution was insufficient, the doctors used coconut water to replace these.

The origin of the coconut

The coconut is cultivated in the North of Hawaii and the South of Madagascar.

The earliest reference to coconut is from Cosmas, an Egyptian traveler from the 5th century AD. He wrote about “Indian walnut” after visiting India and Ceylon. Some scholars believe that Cosmas described a coconut.

The benefits of coconut

The nutritional value of the coconut varies depending on the consumed part of the fruit: A 1/3 cup of coconut kernel has a high fiber, iron and potassium content. Despite being high in saturated fat, coconut does not contain cholesterol and has low sodium levels.

What we need to know when cooking coconut recipes:

If you are going to buy a whole coconut you should know that the outer layer is quite strong, but it has 3 “eyes” where the shell can be pierced with a simple screwdriver. The liquid inside can be drained through those holes and then, with the help of a very sharp knife, the nut can be split and the softcore can be removed with a spoon.

Coconut is more of a secondary ingredient in the culinary recipes, but it has an unmistakable aroma that will give a personal note to your preparations. 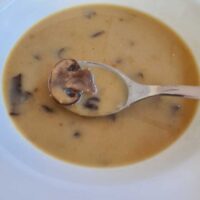 This soup is literally an explosion of intense, exotic aromas! If you’re craving something vegan, yummy, and easy to make, this Asian mushroom soup must be next on your menu …

Are you craving a filling, healthy, vegan lunch that’s ready in no time? Here’s how to make the most delicious, protein-rich festive creamy soup! You may already know how much …

Looking for a quick lunch? Here’s how to make an incredible chana butter paneer masala with basmati rice. Too flavorful to be true! Truth be told, I kind of invented …

In need of a change? Here’s how to make the most flavorful vegan butter chick’n – healthy, easy, creamy, and bursting with exotic aromas! Ah, the Indian gastronomy… truly one …

If you’re bored of basic soups, here’s an incredible recipe to try for a change: vegan coconut curry chick’n soup! Super healthy and bursting with incredible flavors! Here’s a very …

Champignons, Oyster mushrooms, chanterelles, Porcini… if you like mushrooms as much as I do, you’ll surely love this mixed mushroom soup! Healthy and full of flavor! Soup in a can? …

Are you ready for one of the most flavorful autumn recipes with pumpkin? Here’s how to make a creamy pumpkin pasta sauce – incredibly easy and delicious! Another day, another …

Looking for a special pie that’s both yummy and easy to make? Here’s the perfect recipe for vegan peanut butter pie. Give it a try and you’ll end up loving …

There’s nothing easier than this no-bake cherry cake, I swear! It’s quick, it’s fuss-free and it’s extremely delicious. Not to mention it’s 100% vegan and healthy too! What’s not to …

Cherries and chocolate are a match made in heaven and this awesome vegan cherry chocolate cheesecake is here as proof! Give it a try and you’ll be amazed by the …

Refreshing? Sweet? Healthy? Yep, I’m talking about this amazing vegan strawberry tart! Give it a try and I’m sure you won’t regret it – it’s the perfect summer dessert! Who …