Yes, you can make a delicious, decadent and creamy vegan creme brulee in no time! The best part? It looks and tastes exactly like the real deal!

Crème brûlée, also known as burnt cream or Trinity Cream, is a decadent dessert consisting of a rich, custardy cream, topped with a layer of caramelized sugar. But its complexity is far beyond that. 🙂

The earliest mention of this recipe dates from 1691 when it appeared in a cookbook written by François Massialot called Cuisinier royal et bourgeois. The name, burnt cream, firstly appeared in an English translation from 1702. And later, in 1740, Massialot referred to it as crême à l’Angloise, literally meaning English cream. Quite an interesting ping-pong between culinary cultures, right? 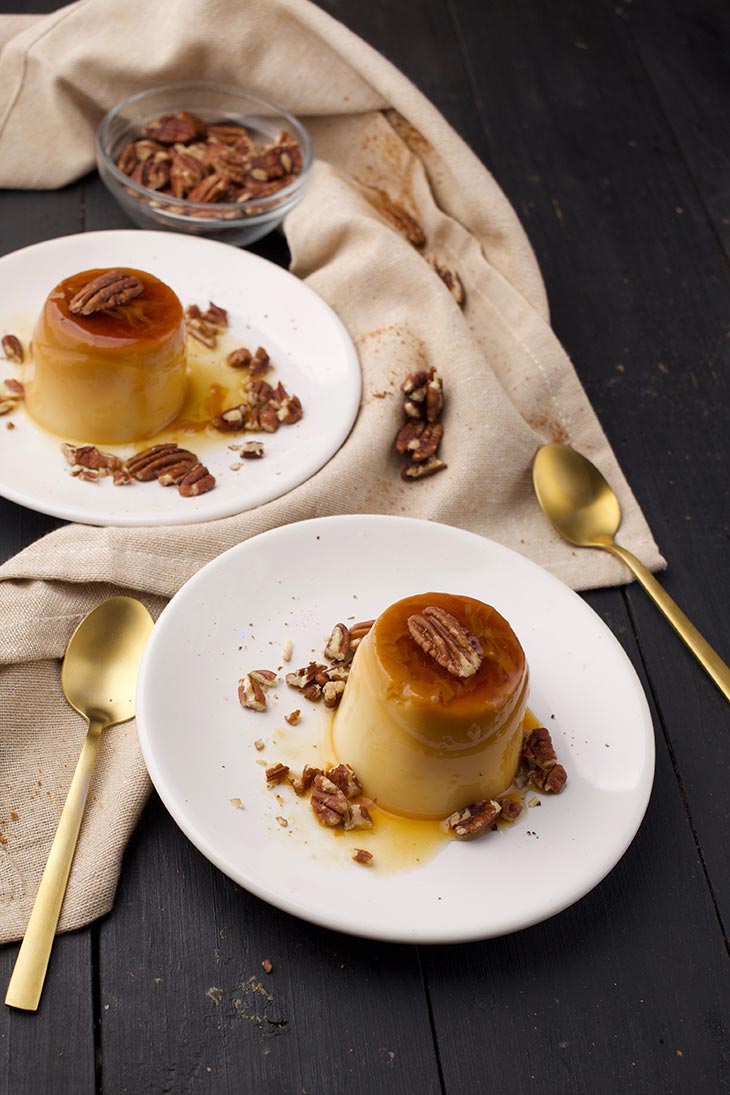 Its other names, Trinity Cream and Cambridge Burnt Cream come from the fact that the recipe was introduced at Trinity College, Cambridge, later on.

However, crème brûlée was not that common during the nineteenth and twentieth centuries, gaining popularity beginning with the 1980s, thanks to a certain Sirio Maccioni and its restaurant. The exact origin of this elegant dessert, however, is uncertain. We have three main possibilities: France, England, and Spain, though each of these countries has a slightly different recipe.

Catalans claim that the original recipe emerged on their territory, under the name of Crema Catalana, a rich, custardy cream topped with caramelized sugar, served cold but with a hot topping.

However, given the fact that custard was such a popular food during the Middle Ages all around Europe, it’s pretty much impossible to trace the exact roots of the famous crème brûlée. And we don’t mind. We’re just glad it exists! 🙂 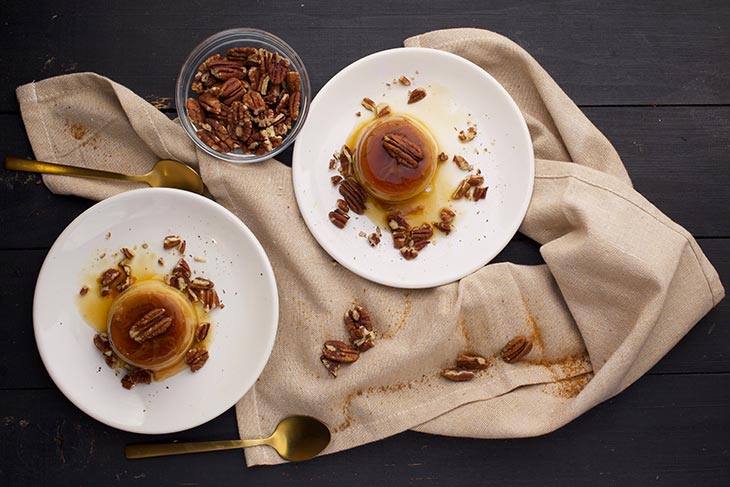 Just like any other old and popular dish, crème brûlée has quite a few preparation techniques. The hardened caramel can either be made separately and placed on top after the custardy cream is ready, or sugar can be sprinkled on the custard and caramelized directly using a salamander broiler or a butane torch.

I believe the last method is the one that’s more popular, and you can definitely see why. It involves quite a bit of artistry and – let’s face it – it’s spectacular and people love this.

What makes crème brûlée so special is the fact that it’s so simple, yet so sophisticated and complex. It’s not a type of in-your-face dessert, it’s one that has to be relished and savored. You have to take your time with this one!

The vegan crème brûlée obviously contains no eggs or dairy and it is also light and low in fat. The best part? You need fewer ingredients than you believe in order to prepare it, the most important one being vegan milk, which you can pretty much find in any store nowadays (or, why not, you can make it yourself!).

You can use pretty much any type, be it oats, almond, soy or coconut. Coconut milk is, however, going to have a stronger flavor than the other ones and it is also that I chose for today’s recipe. 🙂 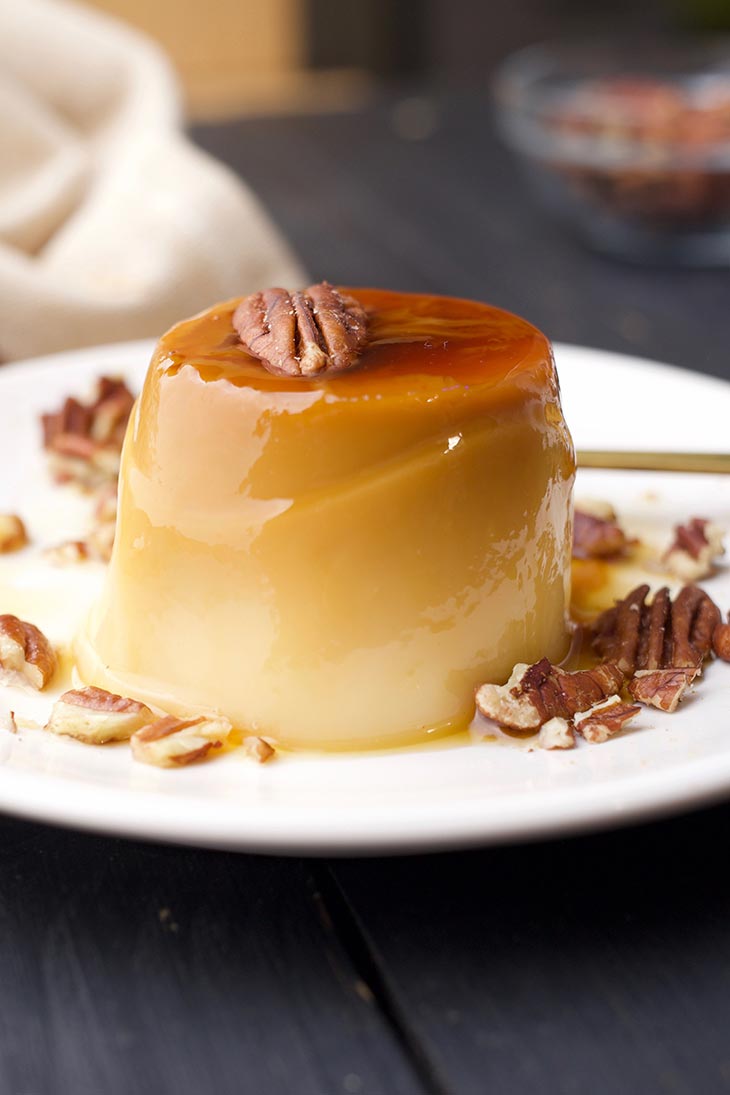 This vegan crème brûlée recipe requires a bit of effort because you’ll have to continuously stir into the pan until the cream thickens (or you can use an electric hand mixer), as you want your cream to have absolutely no lumps, be as thick and rich and smooth as possible.

You will also need a thickening agent, such as cornstarch or agar powder, in order to obtain this thickness. The vanilla flavour is also going to be highly appreciated, and I’m sure I don’t need to tell you why. But don’t overdo it, as it can be pretty powerful compared to the other flavors.

Once the mixture is done, the traditional way to serve it is into small, separate ramekins. The mixture shall be distributed evenly, as the aspect of the dish is very important and it can make or break it. You need to have a little bit of patience and wait until the custard-type cream cools down and it’s good to eat! 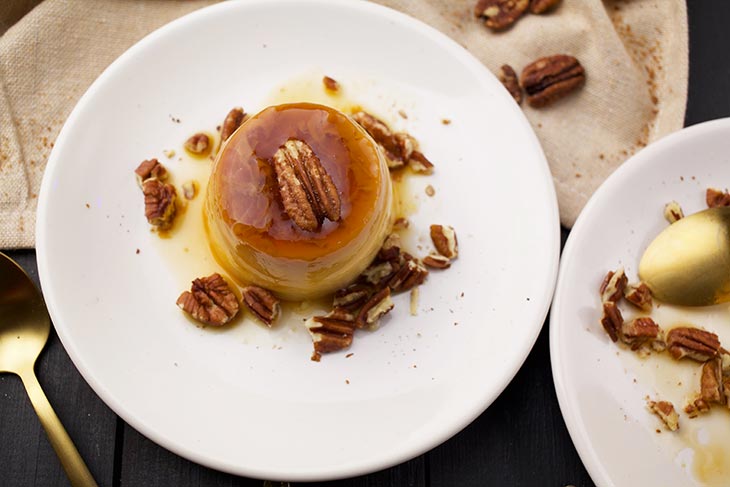 If you want to go an extra step, you can also grab your blow torch and caramelize some sprinkled caster sugar that you poured on top of it. But if you decide to do this, I can’t stress this enough: patience is everything when it comes to this recipe, as only a few seconds can be enough to burn the sugar on top and ruin everything. It needs to be just right!

The vegan cream is incredibly soft, rich and simply amazing, a bit similar to a more equisite pudding! This recipe is all about delicacy, elegance, and the appreciation of subtle tastes and textures. Even its portion size tells a lot about it. There’s something about the shape and cuteness of a ramekin dish.

You can top this vegan crème brûlée recipe with fruit if you’d prefer – berries would work wonderfully – though I am recommending pecan nuts for today’s recipe. Or you can eat it as it is – most of the times it’s perfect just like that, even though it sounds so simple! 🙂 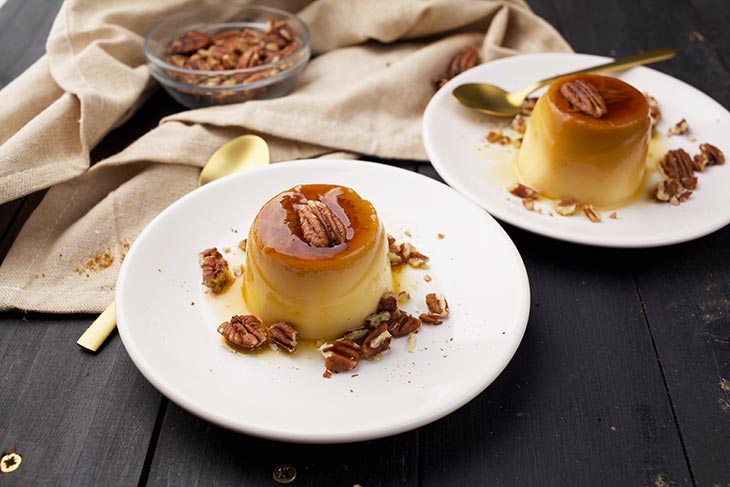 Make this for your next dinner party or family meeting. It’s the perfect dessert for celebration, family time and special occasions. It’s going to bring that special factor to the end of a nice meal. And as always: if you’re trying it, make sure to tell me if you liked it or not!