Spanish cuisine is one of the most popular cuisines in the world! Learn everything you need to know about Spanish recipes from this guide.

Spain is special in many ways. Spain is a country situated on the Iberian Peninsula of Europe, made up of 17 autonomous regions that lend its diversity in culture, heritage, and cuisine. The country is known for its passion for soccer and a good life. Passionate and sophisticated, Spain is a country worth exploring. Of course, you cannot miss its cuisine. Simple, natural, rich and varied, you would find everything to satiate your taste buds.

If you want to learn more about Spanish recipes, check out the guide below. I also added some Spanish-inspired cookbooks recommendations if you want to try even more awesome Spanish dishes.

The Spanish cuisine – how it shaped up through history

There are several factors that make Spanish cuisine so unique. The country was formed by uniting different kingdoms and each one had their own traditions which have added variety to the cuisine.

The mountains divide the country into different regions, each with its separate culinary tradition. The country boasts of having the longest coastline in Europe making seafood and fish available in a bounty.

The history of Spain is fraught with battles and invasions. In the 8th century B.C., the Greeks created their settlements in the coastal areas and the Celts conquered the interiors. In the second century B.C. the Romans ruled over the entire Spain.

Spain also saw the Arabic invasion when it went under Arabic rule in the eighth century A.D. for around 700 years. Later on, the Arabs were driven out too. 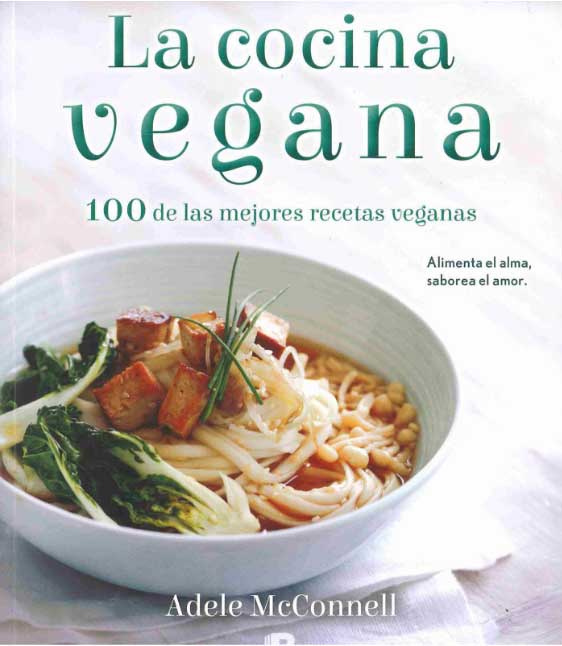 All the foreign invasions had left indelible marks on the history and cuisine of Spain. The influence of Greek culture can be seen in the use of olives and wine. The Celts left their heritage of meat and fish pies while the Moors taught Spanish people to use honey, almonds, and spices like cumin and saffron in the dishes.

Spain was one of the most advanced nations in terms of colonization and exploration. The voyagers explored different parts of the world and brought back foods like beans, potatoes, corn, tomatoes, sweet potatoes, chocolate, peppers, and vanilla. These ingredients slowly found their place in Spanish cuisine, making it richer and tastier. 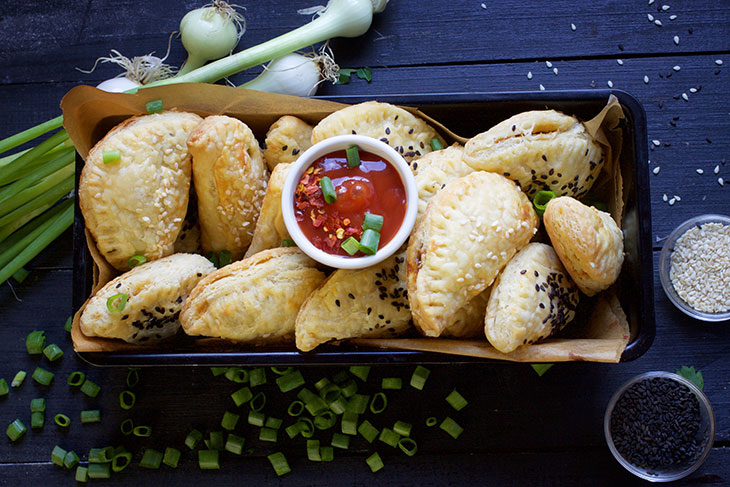 The salient features of the Spanish cuisine

Local ingredients, regional crops and simple cooking methods make Spanish cuisine delightful. Fresh, full of flavors and abundant, you must try the Spanish cuisine if you are a foodie. The Spanish love their food and you must learn to appreciate the subtle taste that has made so many people aficionados of this culinary tradition.

The five culinary regions of the Spanish cuisine

The country can be divided into five regions, based on the diversity of the gastronomy. Galicia, in the northernmost part, is popular for its seafood fare. Be it octopus or prawns or oysters, head to it if you love to experiment with your taste buds.

Castile and Leon are also popular for non-veg food. The Basque Country is home to the gastronomic capital of the country – San Sebastian.

Valencia and Andalucía are two other regions with distinct cuisine.

Staple foods in the Spanish cuisine

Olive oil and garlic are two basic ingredients of Spanish food. Although the cuisine varies from region to region and due to seasonal differences, the use of olive oil and garlic remains common. Olive oil, the extra virgin version is mostly used in Spanish cooking. Apart from that, you may use canola oil for a lighter taste. Garlic is the second most important item required for cooking Spanish food.

Peppers or chile was brought to Spain from America and quickly became a part of their food. There are a variety of dishes prepared by stuffing peppers with vegetables, fish, and meat.

Paprika or pimenton is prepared by grinding dried peppers. It is a prized ingredient for the Spanish chefs as the right taste of the dish can only come out with the perfect paprika. Paprika is available in different tastes like sweet or spicy. It is also smoked.

I recommend this cookbook.

Potatoes are also used widely in Spanish cooking.  Be it soups, stews or casseroles, potato makes the dishes tastier.

Tomatoes were introduced to Spanish cuisine through invasions and ever since they have become an integral part of it. Both in raw form as well as tomato sauce, the people of Spain use this vegetable in multiple dishes.

Parsley is a must-have ingredient in every Spanish home. Onions are also used to make the famous Spanish omelet and other side dishes.

Milk is used to prepare not only desserts like flan but also soups too.

Cheeses are a favorite with Spanish people. They are available in different varieties like manchego, tetilla, and even blue cheeses. Cheese is eaten in the form or tapas or during meals. It is also included in the dessert.

Legumes are also consumed by the Spanish people in large quantities. In fact, beans and garbanzo beans or chickpeas contest with bread to occupy the most preferred food here.

Other than garlic, herbs like oregano, rosemary, and thyme are put in the dishes for extra taste.

Nuts are also popular in Spain. Hazelnuts are commonly mixed with chocolates here. Turron is an almond nougat candy which forms a part of the Christmas delicacies.

You must have heard about Spanish omelets. Other than that, sausages are quite popular here. Meat varieties like beef, pork, and lamb are consumed by grilling them, roasting them or sautéing them in sauces. Chicken is also popular with Spanish people. 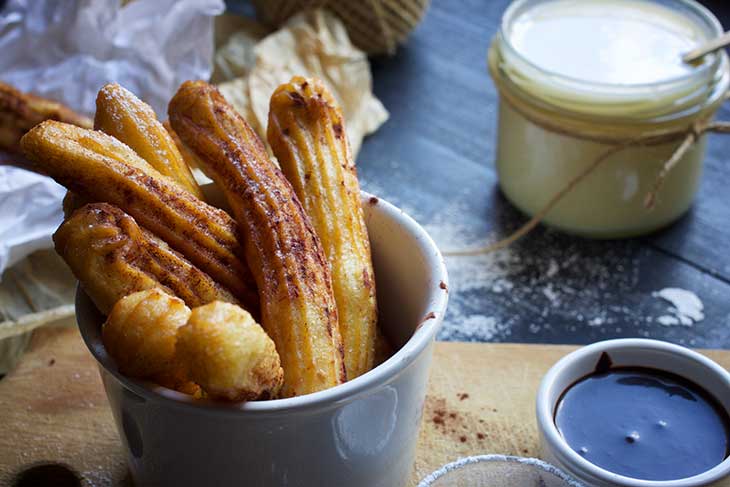 Let’s talk about the Spanish cooking method now. Most Spanish dishes are still prepared in the traditional method which was followed two hundred or three hundred years ago. Grilling is the most common method of Spanish cooking. Charcoal grilling is known as a la parilla or a la brasa. Chicken or fish are usually prepared in this method.

Cocido is stewing which is used to prepare vegetables, beans, and even meats.

A la pancha is a popular method of grilling on a metal plate. The traditional Spanish round metal grill allows the heat to spread evenly. The food remains juicy inside while the outside becomes crispy, allowing the foodies to enjoy the taste of the ingredients fully.

Let’s get into something more exciting – the popular Spanish dishes and how they originated from a particular region.

The stew paella is one of the most popular dishes of this country and is made from rice which originated in Valencia as rice is grown here.

Gazpacho is a cold tomato soup that was originally prepared in Andalucía in southern Spain. This region is also famous for fried fish items. Asturias is famous for its signature dish fabada which is a bean stew.

Spanish recipes you must try

Are you visiting Spain? Do you like to try different cuisine and Spanish cuisine has caught your fancy? You need to know the most iconic dishes in Spain so that you can try them and become a true connoisseur of this cuisine. 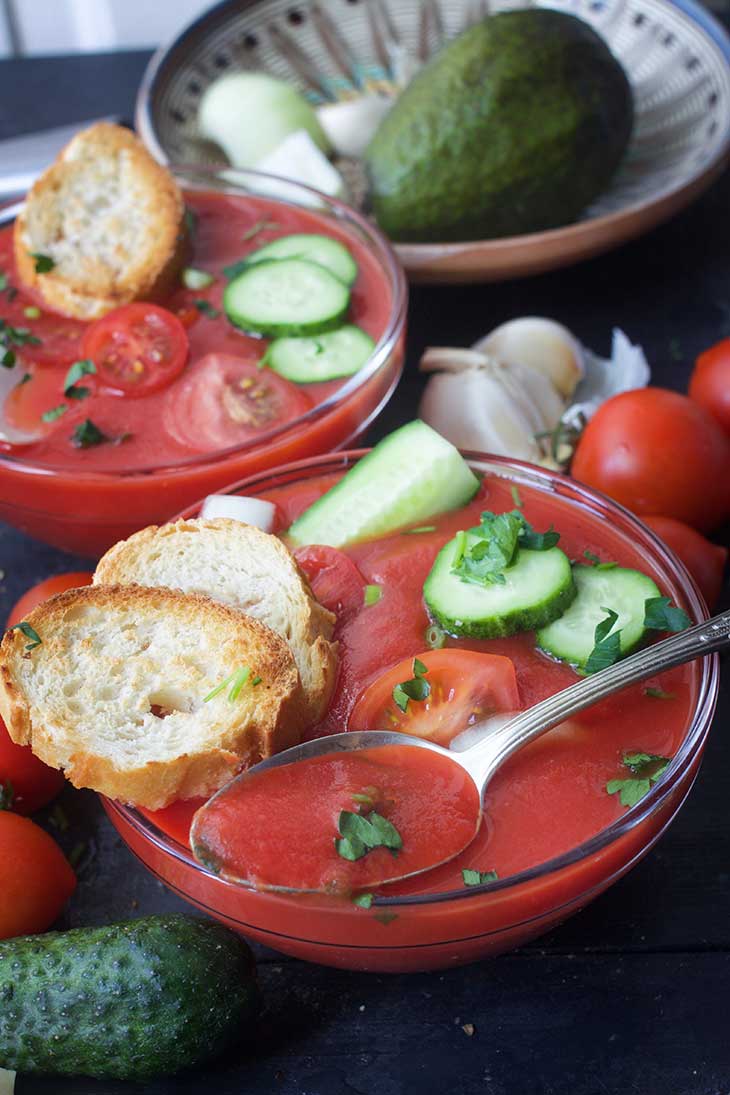 Have a bowl of gazpacho

A refreshing bowl of gazpacho is all you need this summer. Made of ripest of tomatoes and blended with garlic, olive oil, peppers, and cucumber, gazpacho is perhaps the most popular dish in Spain.

It is a staple food of Andalucía where summers are really hot. Even in tapas bars, you would find a jug of gazpacho to refresh yourself. 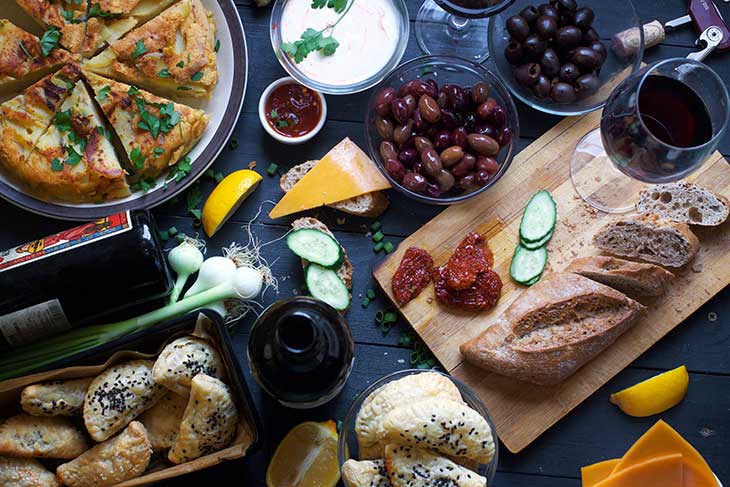 You must be wondering why I didn’t begin this section with tapas as it is the most iconic dish in Spain. Well, I wanted to dedicate a whole paragraph to it.

If you are getting introduced to Spanish cuisine for the first time, let me explain that tapas is actually not a type of food but small meals that the people of Spain enjoy at any time of the day.

If you are in Spain and visit a bar, you can expect to be served tapas free of cost along with your drink. Tapas is a part of the Spanish lifestyle just like soccer. There are tapas bars in the big cities like Madrid where they serve different tapas dishes with mini sandwiches, squids or almonds along with your beer. 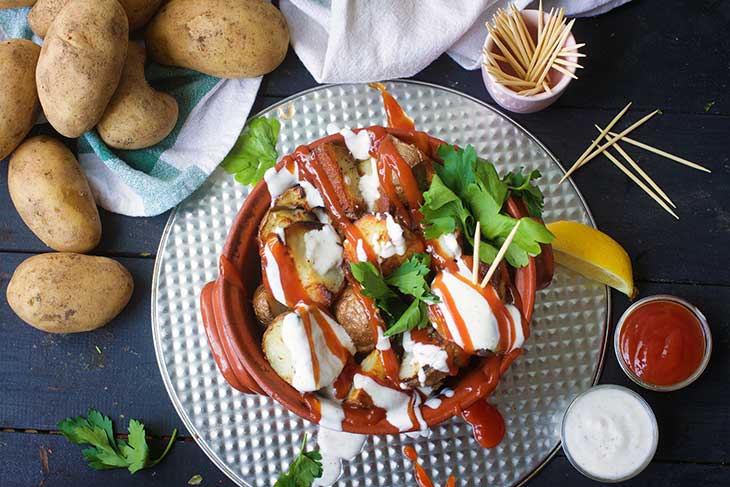 This is one amazing potato recipe! Patatas bravas are chunks of fried potatoes that are prepared differently in different regions of Spain. It forms a part of tapas also. Enjoy these in Madrid with sweet and spicy paprika on top.

Paella – the comfort food for Spaniards

Paella is a traditional rice dish from Spain. It is available in three different versions in Spain. If you love meat or seafood try it. Added with vegetables, saffron, and other spices, it is one dish that would satiate your taste buds fully. 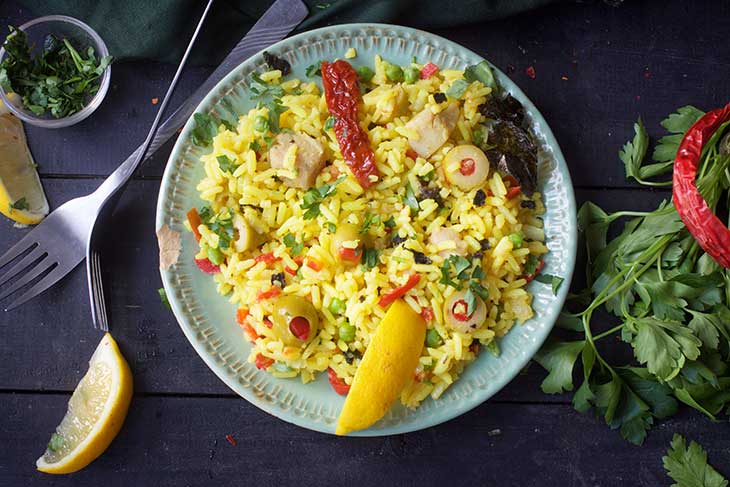 Pisto – begin your meals with it

Some call it Spanish version of ratatouille but it is prepared in different ways in Spain, especially in the La Mancha area. A slowly cooked dish that fully retains the flavors of the ingredients used like the tomatoes, onions, garlic, courgettes, and peppers in olive oil. It is enjoyed as a starter and as a side dish also.

The cheese of Don Quixote

Cervantes made this cheese immortal by mentioning it in his book Don Quixote of La Mancha. It is made of sheep milk and tastes heavenly. It has an intense flavor that lingers on making you savor it fully.

For making Spanish omelet you’ll need eggs, onion, garlic, potatoes and a touch of deft hands to rustle the best Spanish omelet. This recipe can be easily veganized as well. 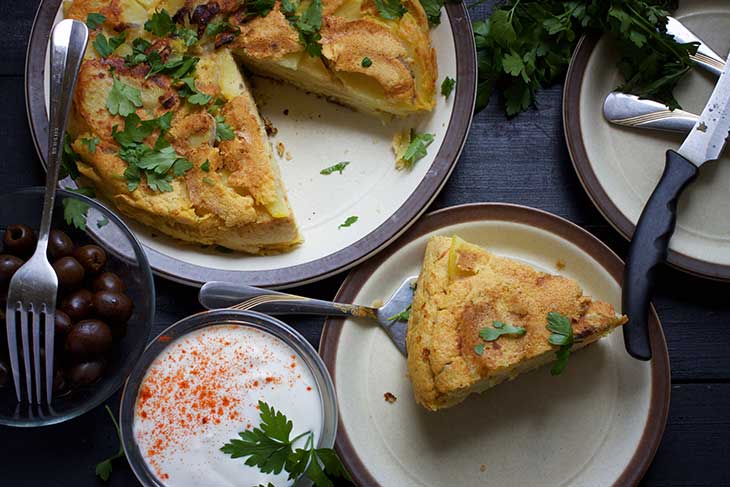 Only Spaniards can prepare such a simple and tasty dish with vegetables. Circles of onions and peppers are deeply fried to enjoy as snacks.

Spinach and chickpeas. It may sound like a weird combination but try this dish. It’s healthy, amazing and easy to prepare. 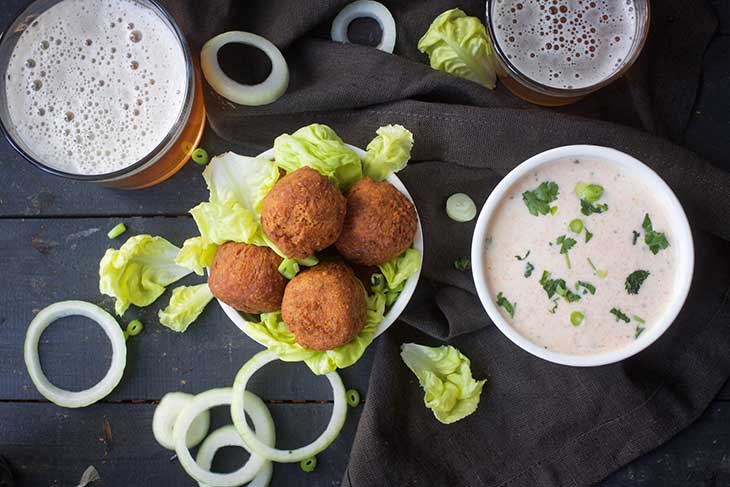 Spaniards are great at experimenting with their foods and croquettes are the finest example of that. This dish is prepared with different ingredients. Small balls are prepared for a mish-mash of food which is fried for a great taste.

Spain is famous for non-veg dishes too. Eggs, chicken, duck, ham, and seafood are popular across the country. Amongst the non-veg dishes, Jamon is very popular. Available all over the country, succulent slices of ham are offered as part of tapas or side dish too.

Desserts in Spain – a heavenly experience

Spaniards are known for their sweet tooth. Cakes, pastries and a variety of desserts are included in their meals. Turron or almond candy is the Christmas treat here. Other cookies that are eaten during Christmas are the mantecados. Rich, crumbly, and soft, they melt in the mouth.

Flan – I know, you must have been waiting for me to mention it. This is perhaps the most popular Spanish dessert that is prepared with vanilla egg custard, with caramel sauce.

Catalan cream is associated with the history and tradition of the country. The burnt sugar crust along with the creamy custard would blow your mind.

Natillas or Spanish custard is comfort food for many Spaniards. Smooth and rich with vanilla and cinnamon extract, have it warm and let the taste soothe your soul. 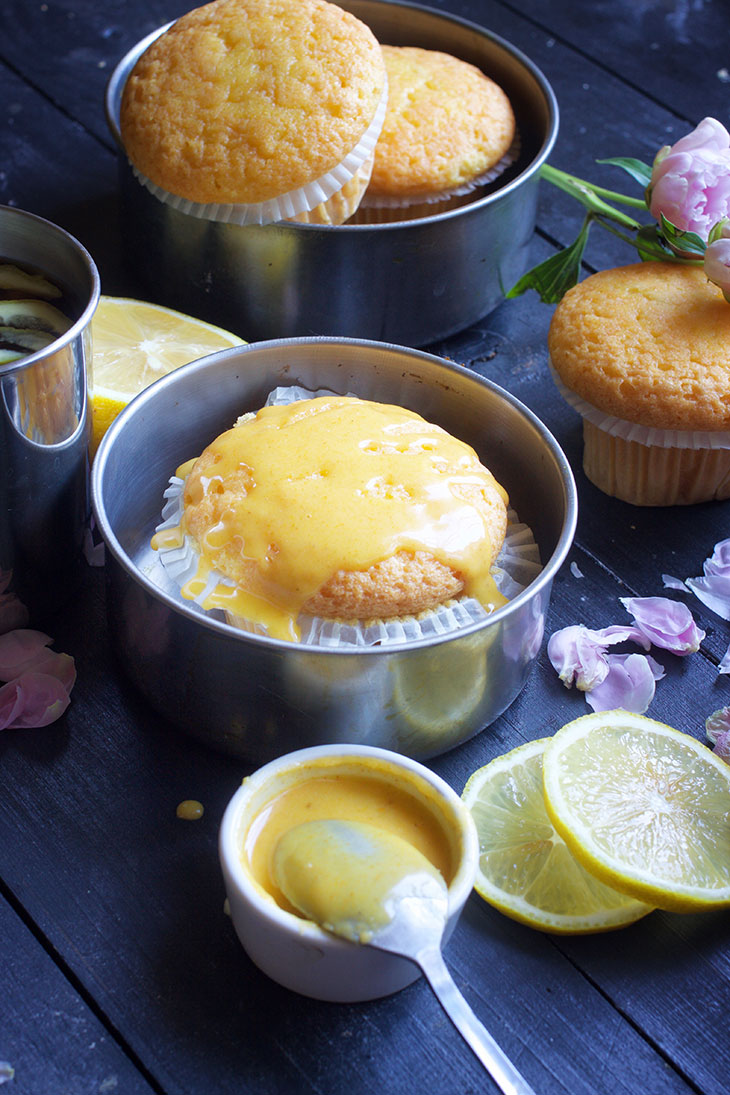 Spanish restaurants and chefs you must know

Food must delight our senses and that’s exactly how Spaniards see their food. No doubt, the country has some of the world-famous restaurants with renowned chefs.

Visit Spain on your next vacation. Enjoy the landscape, the hospitality, have coffee and wine and everything in between that defines the Spanish cuisine. Personally, I can’t wait to visit it soon! 🙂 I hope you enjoyed this Spanish cuisine guide and the recipes.