If you want to start experimenting with homemade sourdough, here’s where to start! Here are 10 incredibly good recipes for sourdough cinnamon rolls!

Cinnamon rolls are a delicious treat that’s been around since the 17th century. Everyone around the world is probably familiar with this amazing breakfast dessert – or I’m sure you’ve at least seen it in numerous coffee shops. But did you know you can make sourdough cinnamon rolls? For me, this is the ultimate sweet treat and I’ll tell you everything about it down below!

Cinnamon rolls were created in Sweden during the 17th century when buns were baked with a glaze made of butter and sugar. This tasty treat was later brought to America by immigrants and served with cream cheese icing as we know it today.

But have you ever wondered why cinnamon rolls are so popular? After all, they’re not exactly a healthy breakfast item — they’re more like dessert in the morning. But let me tell you: there is something about eating a fresh-out-of-the-oven cinnamon roll that will make your face light up like the sun on the first day of spring.

The smell of cinnamon and sugar is simply irresistible, so it makes all the sense why it’s so hard to resist in front of a fresh batch of cinnamon rolls. It’s hard to not eat more than one — or two or three (but who’s counting?).

While most people associate cinnamon rolls with breakfast (and rightfully so), they can also be enjoyed any time of day or night – and, in all honesty, I consider them to be more a dessert or a special sweet treat anytime during the day that the one thing you start your day with. Hey, you know I’m not a fan of sweet breakfasts! For me, cinnamon rolls are perfect for dinner parties or weekend breakfasts with friends.

Cinnamon rolls are not only delicious, but they’re also incredibly versatile — the bread dough can be flavored or filled with almost anything.

For example, you can substitute the all-purpose flours usually used for cinnamon rolls with other options. Whole wheat flour will make a denser cinnamon roll with a nutty flavor; rye flour will give it a darker color and slightly tangy taste; oat flour gives the rolls a slight sweetness and makes them more nutrient-dense.

You can even go non-traditional by adding fillings such as chopped nuts, chocolate chips, or dried fruit after baking instead of before baking—or switch up what kind of topping you use by using maple syrup or a chocolate frosting instead.

Or, another alternative that I really love is to use sourdough when making your cinnamon rolls instead of regular yeast.

What’s so special about cinnamon rolls made with sourdough?

In case you haven’t noticed, I am a little obsessed with sourdough. It’s true! I have written about sourdough bread and even shared my own sourdough starter recipe there. But what about cinnamon rolls? Why make them with a sourdough starter?

It’s pretty simple: A sourdough starter adds a lovely tang to the flavor of the roll, as well as extends its shelf life.

Once your sourdough has been prepared with water and flour, its probiotic properties will extend the shelf life of your cinnamon rolls by up to 10 days (compared with regular yeast). In addition, they’re healthier than traditional yeast rolls because they contain less sugar and refined wheat flour.

The fermentation process also offers an incredible taste and will make these rolls rise better than those made with traditional baking ingredients.

Sourdough cinnamon rolls are the perfect way to start your day. They’re soft and fluffy, with just enough sweetness so that they don’t feel too heavy in your stomach. The best part is that they’re also really easy to make — you only need a handful of ingredients! 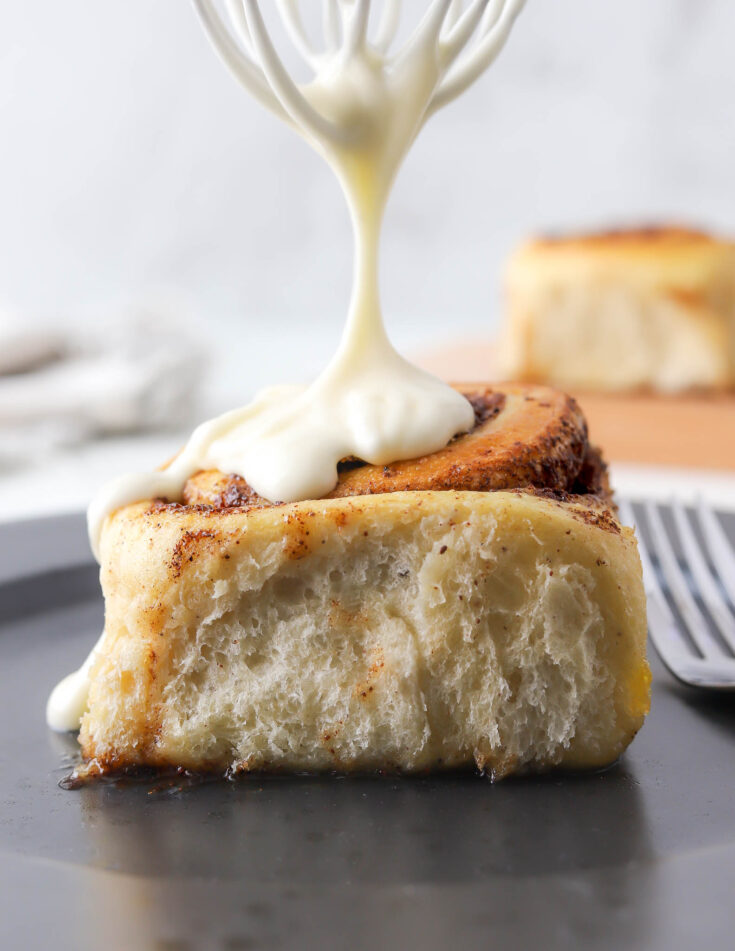 Delicious sourdough cinnamon rolls with a gooey center? Yes, please! Trust me, the cinnamon filling for these rolls is simply divine!

Recipe created by Bread by Elise. 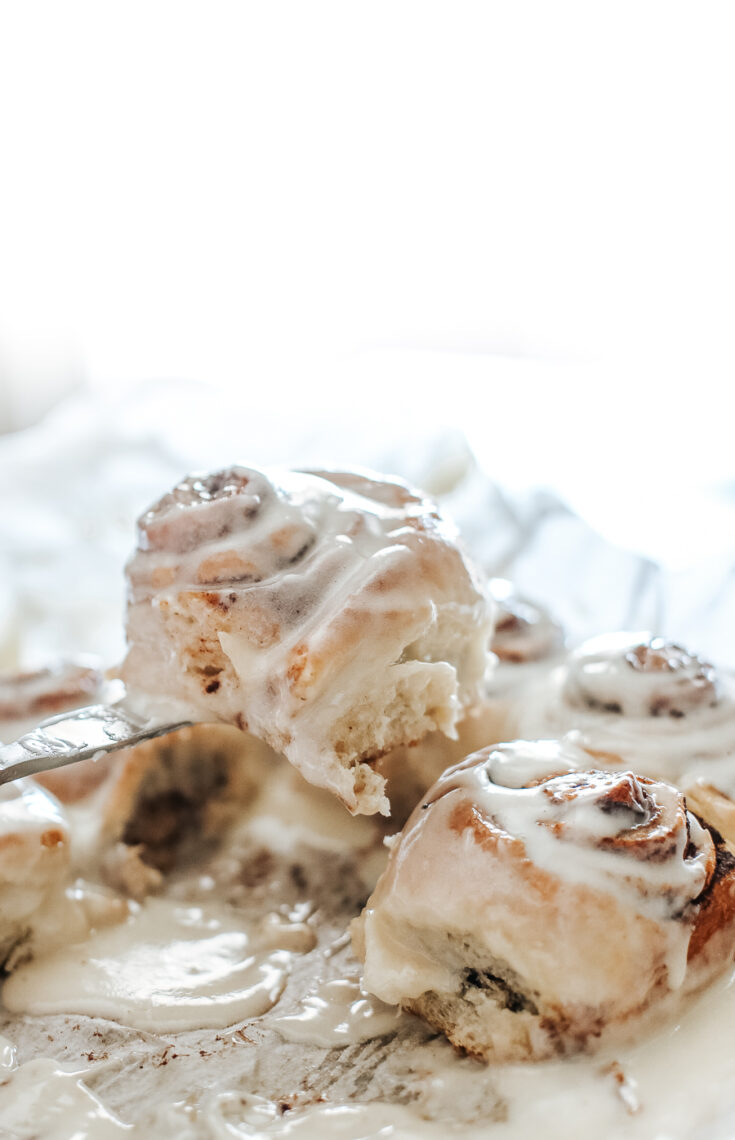 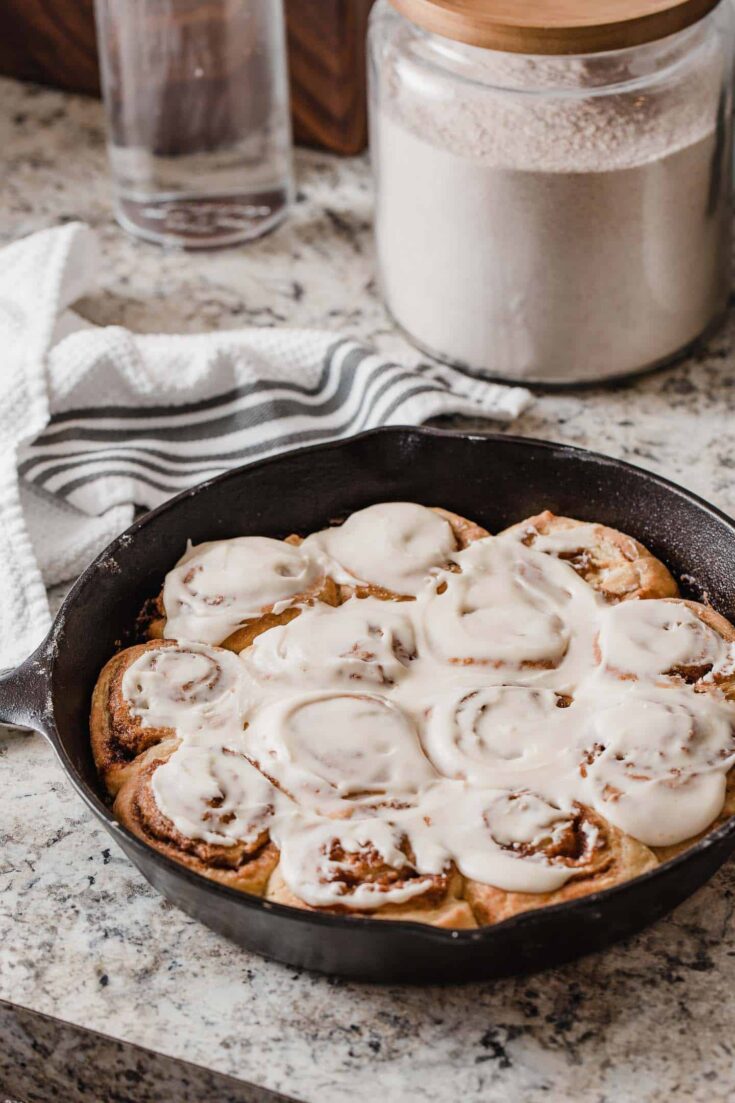 These cinnamon rolls can be made with sourdough discard and are super easy to make. No stand mixer is needed! 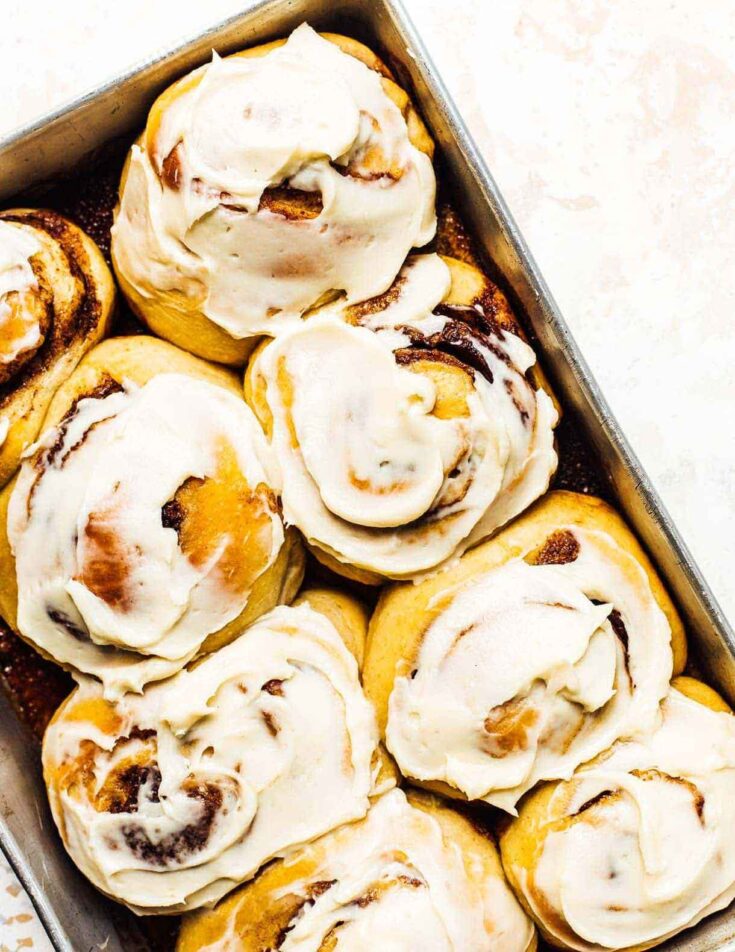 This recipe will help you achieve chewy, super soft cinnamon rolls each and every time. Top them with an incredibly good cream cheese frosting and you'll be in Heaven! 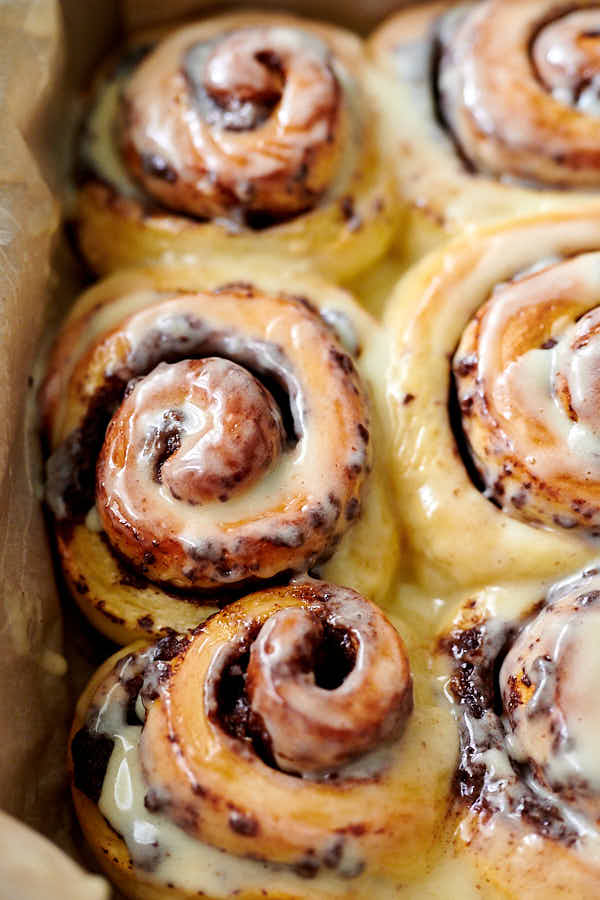 These yummy sourdough cinnamon rolls made with discard are soft and absolutely delicious. Just look at them!

Recipe created by Taste of Artisan. 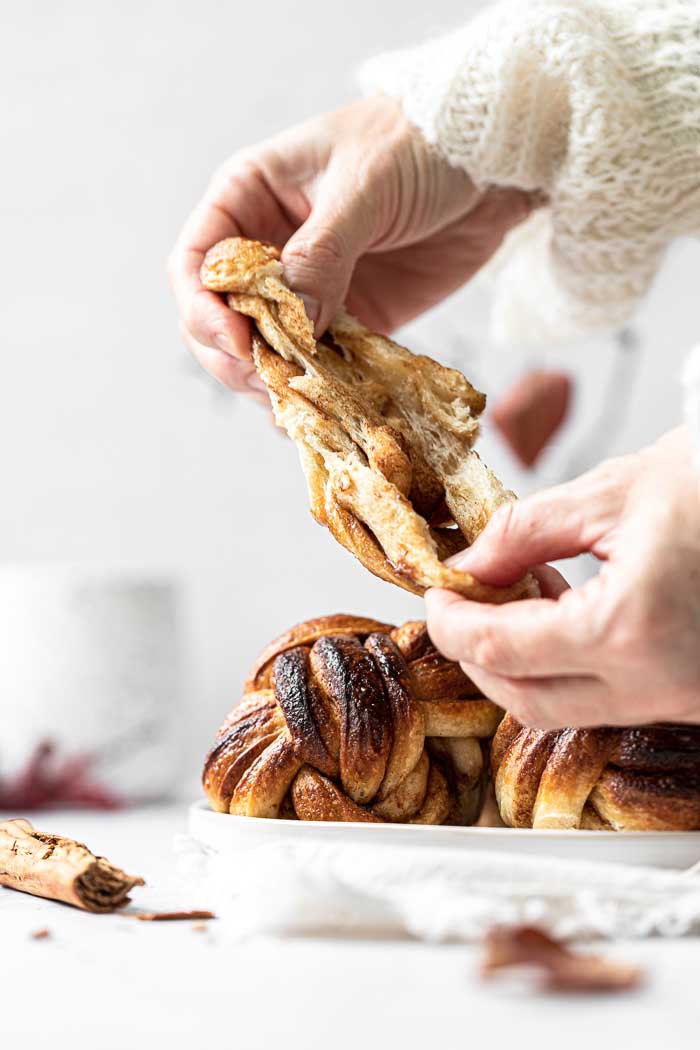 These cinnamon buns have a slightly different shape from the classic cinnamon rolls, but the taste is equally amazing! And they're more fun to make!

Recipe created by Adventures in Foodieland. 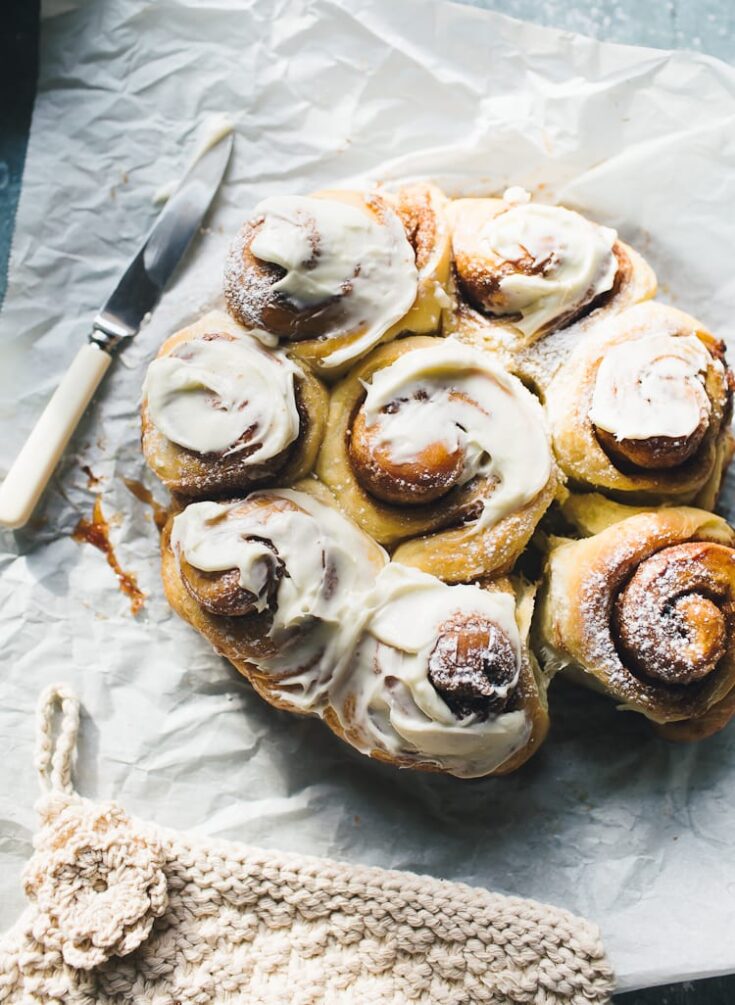 Recipe created by The Clever Carrot. 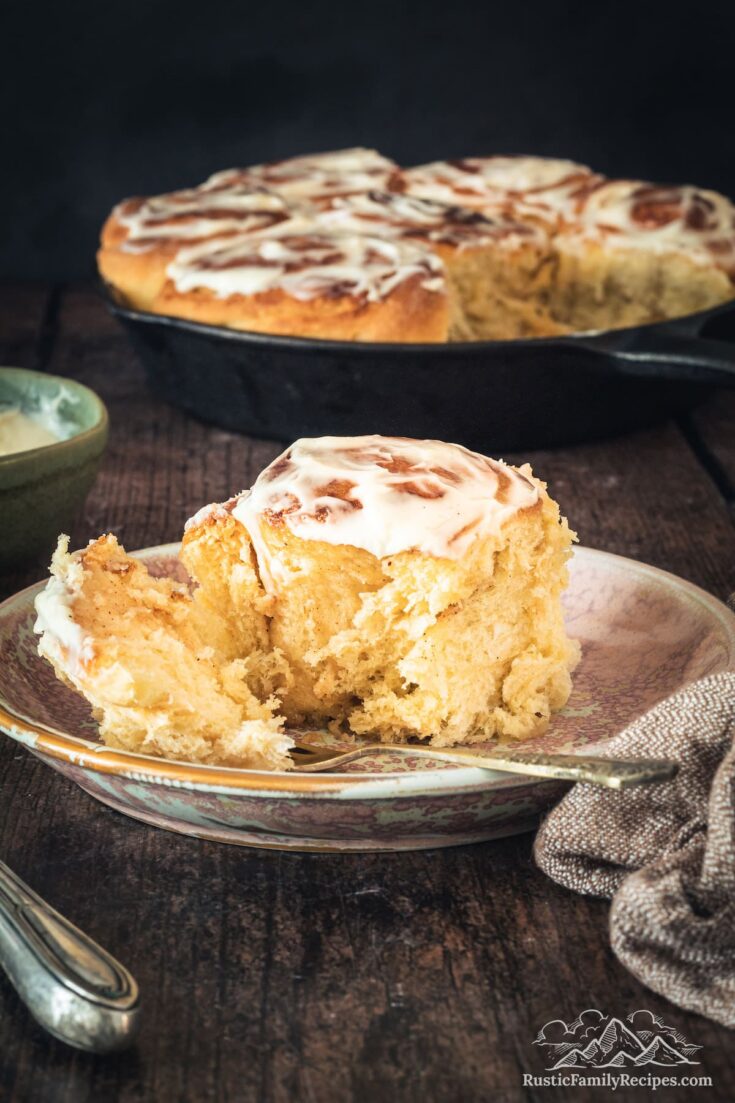 Fluffy cinnamon rolls filled with lots of cinnamon sugar and topped with a sweet-and-tangy cream cheese frosting. The perfect treat!

These fluffy sourdough cinnamon rolls require no rinse time, which is absolutely amazing for those of you that don't have a lot of time on your hands!

Recipe created by Mamas on a Budget. 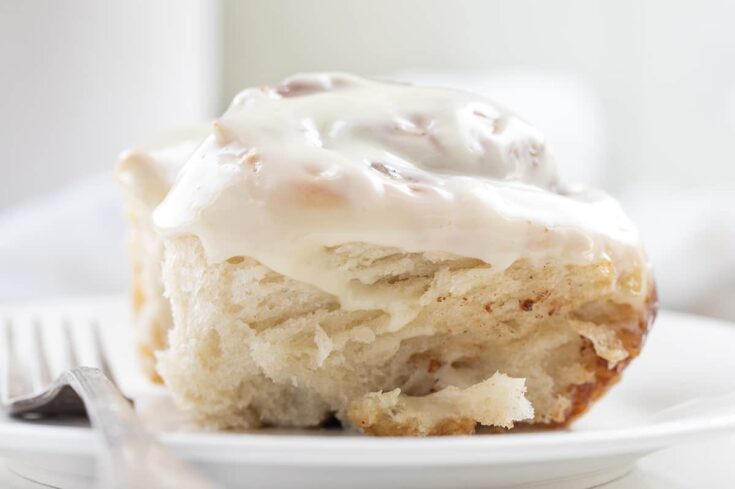 Cinnamon Rolls {Made With Sourdough Starter!}

Sweet, fluffy, and delicious! These sourdough cinnamon rolls full of cinnamon flavor and topped with a homemade whipped cream cheese frosting are to die for!

Recipe created by I Am Baker.