Have you heard of cabbage rolls before? If not, you must absolutely try this recipe for vegan cabbage rolls for your next family dinner – it’s delicious and unique! Everyone will be impressed!

Today I am going to tell you about an extremely famous and loved Romanian dish: the cabbage roll a.k.a sarmale! The cabbage rolls are a traditional Eastern European dish, often found at special occasions and holiday meals.

They are usually made during the winter season, due to it being quite fatty and heavy, meat-based. A cabbage roll is usually made out of a mix of different minced meats, rice, and vegetables, wrapped around in a cabbage or vine leaf. 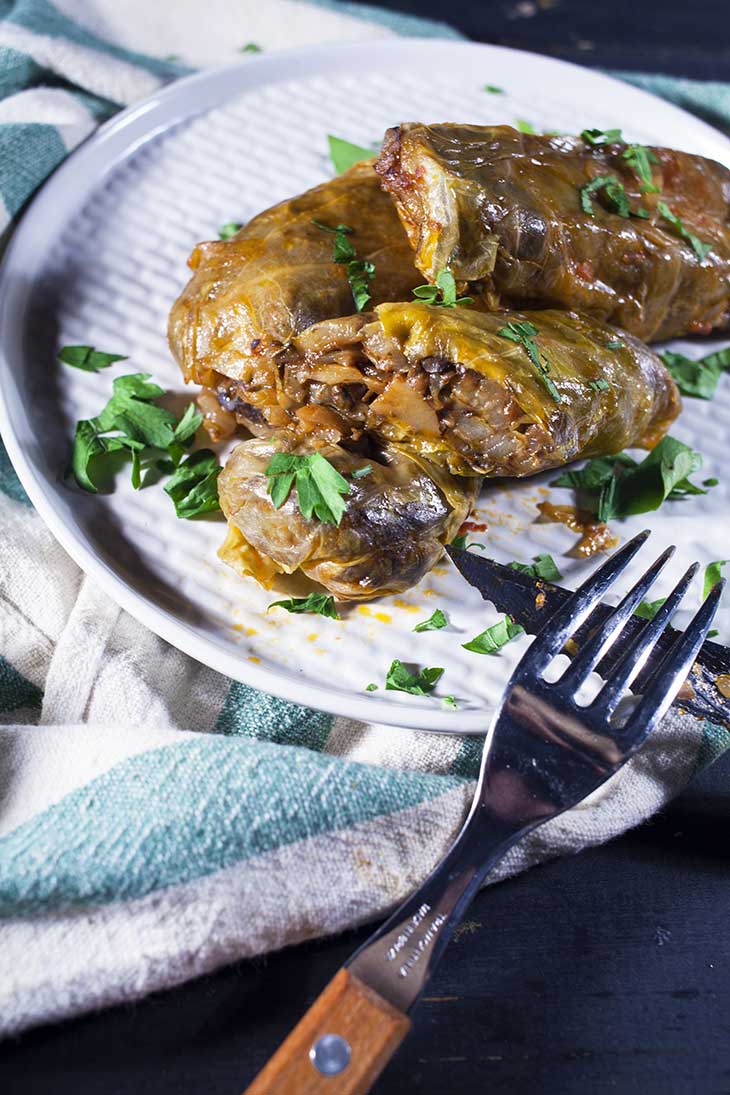 The cabbage rolls are called sarmale in Romania, which comes from the Turkish sarmak, meaning ”to wrap”, or ”to bind”. In fact, this dish was first created in Turkey, after which it spread to Eastern Europe and even further. Nowadays, it is a staple dish in countries such as Bulgaria, Croatia, Hungary, Serbia, and even Germany or Sweden.

In fact, each country has its own distinct version of the cabbage roll, no two being exactly alike. The Romanian cabbage roll is similar to the Turkish version, and also to the Greek. Greek Cypriots call these veggie rolls gemista (”filled”), dolmas or dolmades. They even have a name for vegan veggie rolls (which are usually served during the Lent), that is pseftika, or ”fake”, because they don’t contain meat.

The Bulgarians use a mix of minced meat, rice, and yogurt, something quite unusual for the Romanians, who prefer using sour cream or fat yogurt as a side rather than the main ingredient, in order to ”cool off” the rolls. In Romania, the pickled cabbage leaves are the most popular wrap for these rolls, whereas in the West this is less likely, as westerners prefer vine or stevia leaves. 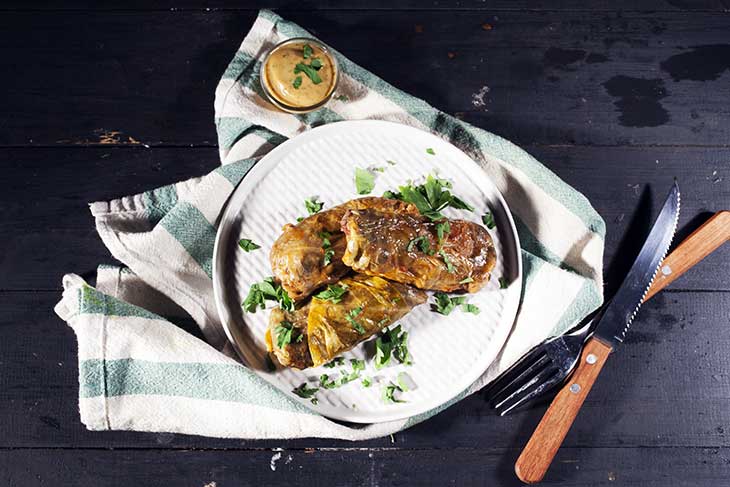 The love Romanians share for cabbage rolls can be easily understood when you consider the existence of lent cabbage rolls, which are basically the vegan version of traditional cabbage rolls, and are equally popular as the latter.

The recipe was conceived with the sole purpose of enabling Romanians to enjoy their traditional sarmale even during the Christmas Lent period, which lasts from the 14th of November to the 24th of December, a period in which the consumption of meat and animal-based produce is forbidden, as a means of purification. 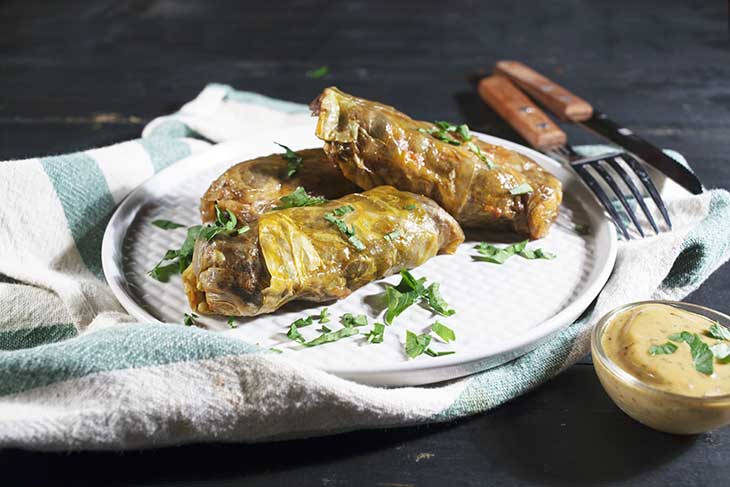 All recipes for lent or vegan cabbage rolls replace the meat with rice, vegetables, nuts or even raisins. They can turn out delicious, and are often even the favorite of non-vegans!

The most prevalent Romanian variations of this recipe are the ones that use rice and mushrooms, along with several different herbs and spices. Soy, chopped vegetables, maze, and even breadcrumbs can be used, the number of combinations being endless. Classic rice cabbage rolls contain vegetables such as onion, carrot and pepper, and are usually spiced with thyme, salt and pepper.

It is a simple recipe with few ingredients that can be used in different ways – being mostly tasteless, rice goes well with many types of vegetables. A funky combo is rice and raisins, which might sound unappealing, but it is absolutely delicious and worth trying out! 🙂 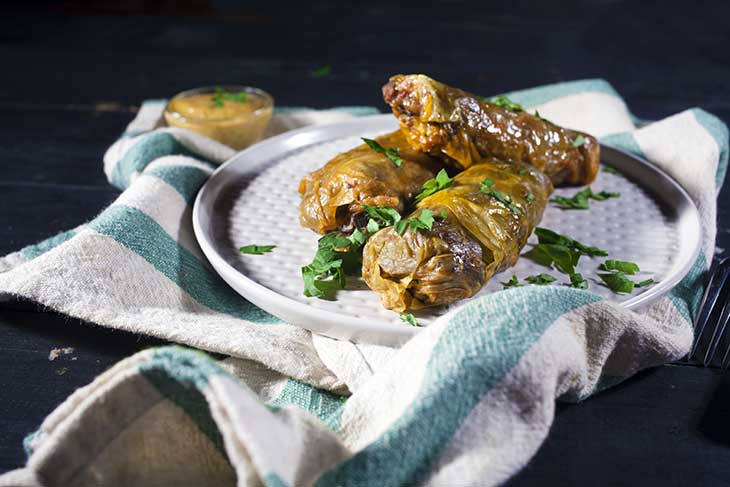 Mushrooms can also go splendidly with any chopped vegetables. The texture of finely chopped mushrooms will resemble that of meat, given that mushrooms have a high protein content, therefore you won’t miss out on anything if you eat this type of vegan cabbage roll – not even if you’re the biggest carnivore that you know of!

A meatless dish doesn’t automatically mean it will feel less consistent. A vegetable filling can be very nourishing depending on the ingredients used. This filling is usually wrapped in pickled cabbage leaves, but one can also use stevia leaves, spinach or even horseradish, depending on the region.

The size of the cabbage rolls can also vary depending on the region they’re from. The biggest ones you can find in the Ardeal region of Romania, and the smallest one in Moldova, Oltenia rolls coming somewhere in-between. 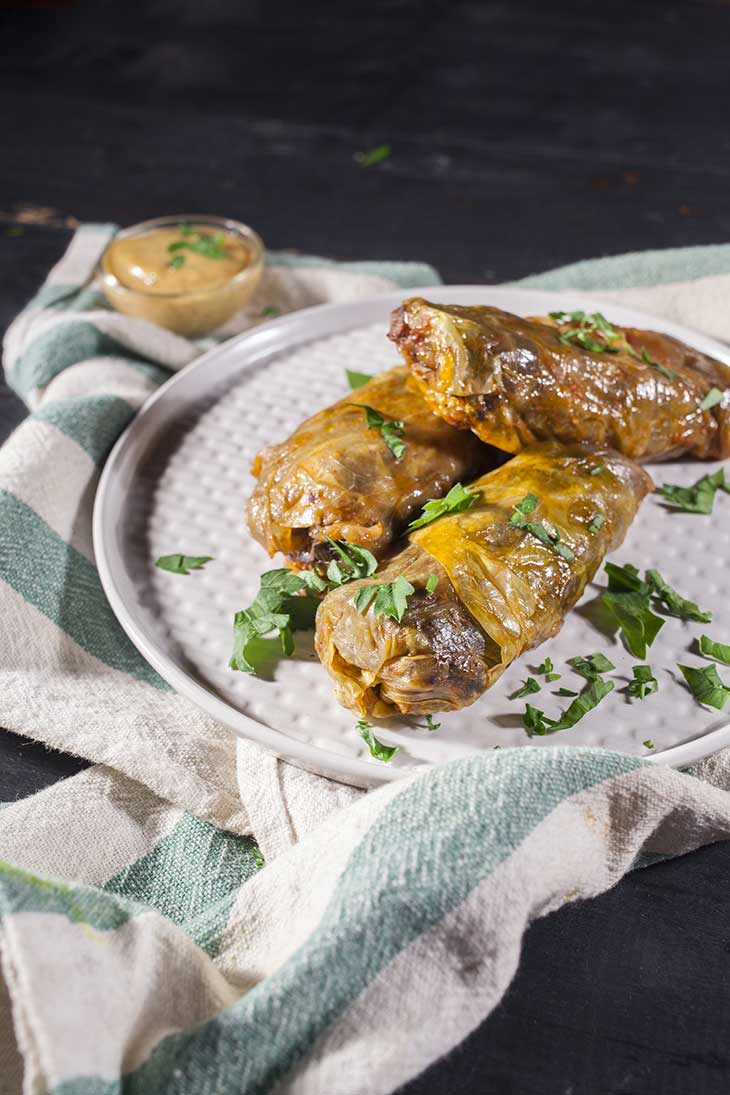 The vegan version of this dish served during Lent is also considered to be healthier, not to mention it has fewer calories. The veggie composition makes this dish easier to digest than the meat-based version, and all this without compromising the taste. Vegan cabbage rolls are made with vegetable fats, like sunflower oil or olive oil, which are by themselves healthier than animal-based fats, such as lard.

Cabbage rolls, whether vegan or not, are usually served as a main dish with polenta and vegan sour cream (or vegan yogurt), and sometimes garnished with hot pepper, potatoes or bread. It’s usually considered that traditional cabbage rolls are best consumed hot, while the vegan ones, being lighter, should be consumed at room temperature or even straight out of the fridge. 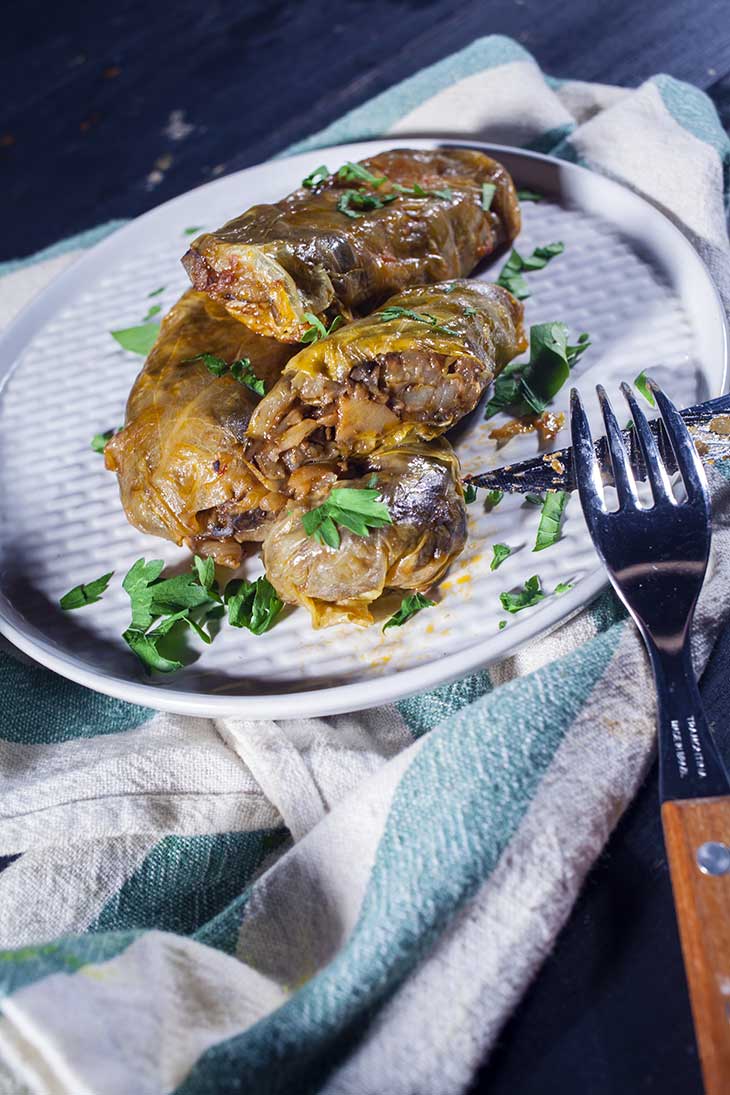 Since we are in the holiday season, I highly recommend you try some vegan cabbage rolls this year. The options and combinations are endless, so why not experiment a little? 🙂 I used Champignon mushrooms for this recipe, which provide the perfect texture and consistency, so give them a try!

Even though this recipe requires some time to prepare, the end result is sooo delicious and special! Never tried these before but I'm so glad I made your recipe, thank you! :)

So happy you liked it, Nina! :D