Mexican dinner? Movie night? Regardless of the occasion, these loaded vegan nachos are the BEST snack! Here’s how to make them in 15 minutes!

Confession time! I decided to change things on the blog a little – I decided to start posting ALL those excellent recipes I’m making every day for lunch or dinner. These are yummy, easy recipes for everyday cooking that I made and loved, but for which I didn’t have any time to take “professional” pictures with my camera because I was just TOO hungry. I have so many recipes like this that I didn’t share with you guys because I felt the visuals are “not worthy”. I had no props, no proper light, and no fancy plating. But I won’t let that stop me ever again!

So for this recipe, I only have a couple of photos taken with my phone, but what’s important here is the taste and the actual recipe. No perfect pictures ahead, just my real, non-polished food that I eat in my real life. 🙂 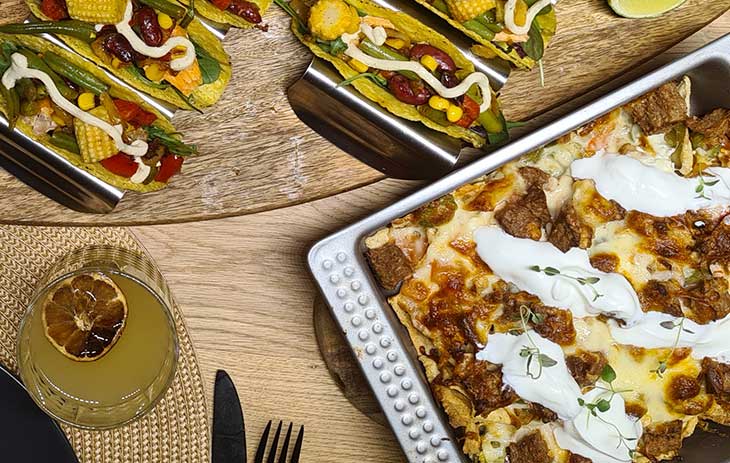 I prepared these loaded vegan nachos some days ago, for a Mexican-themed dinner together with my boyfriend. I’ve told you about my themed evenings before, but I think they’re worth mentioning again in case you’re looking for some inspiration.

This is a sweet, pandemic-friendly practice I’ve been taking up lately in order to drive away from the routine: several times a week I’m preparing a themed dinner with food, drinks, and sometimes even music as well. It’s like dining out in a restaurant, only cheaper, easier to customize, and more romantic. You can choose anything you like: Italian, Chinese, Japanese, Spanish… but for today, we’re all about Mexican flavors and spices!

Want to hear a funny story as well? Because I wanted to properly “mimic” a restaurant atmosphere, I used this video as a background sound. You might laugh at the idea, but we really enjoyed an authentic bar atmosphere. Totally recommended! 😉 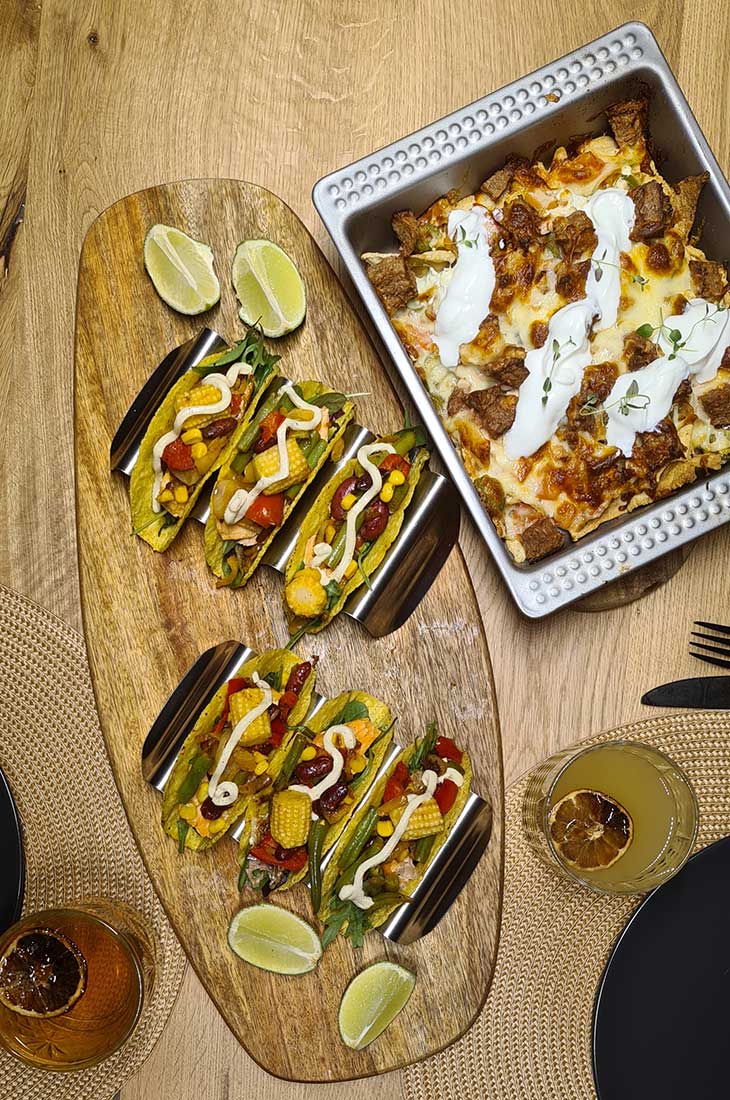 Now let’s talk about nachos for a bit. For me, nachos are an amazing food hack for those days or evenings when you don’t really feel like cooking, maybe you’re craving some junk food or you’re not extremely hungry. The best idea for those days? Nachos!

Yes, nachos aren’t just a simple snack that you nibble on at the cinema, they can be proper dishes if you pair them with the right ingredients. And trust me, these loaded vegan nachos are both delicious AND healthy!

Okay, back to our recipe now. For the minced meaty part of the toppings, I used a vegan burger patty. I let it unfroze at room temperature, then I crushed it into smaller pieces and topped the nachos with it. I used a Verdino patty, but you can use any other similar brand you prefer such as Beyond Burger, etc. 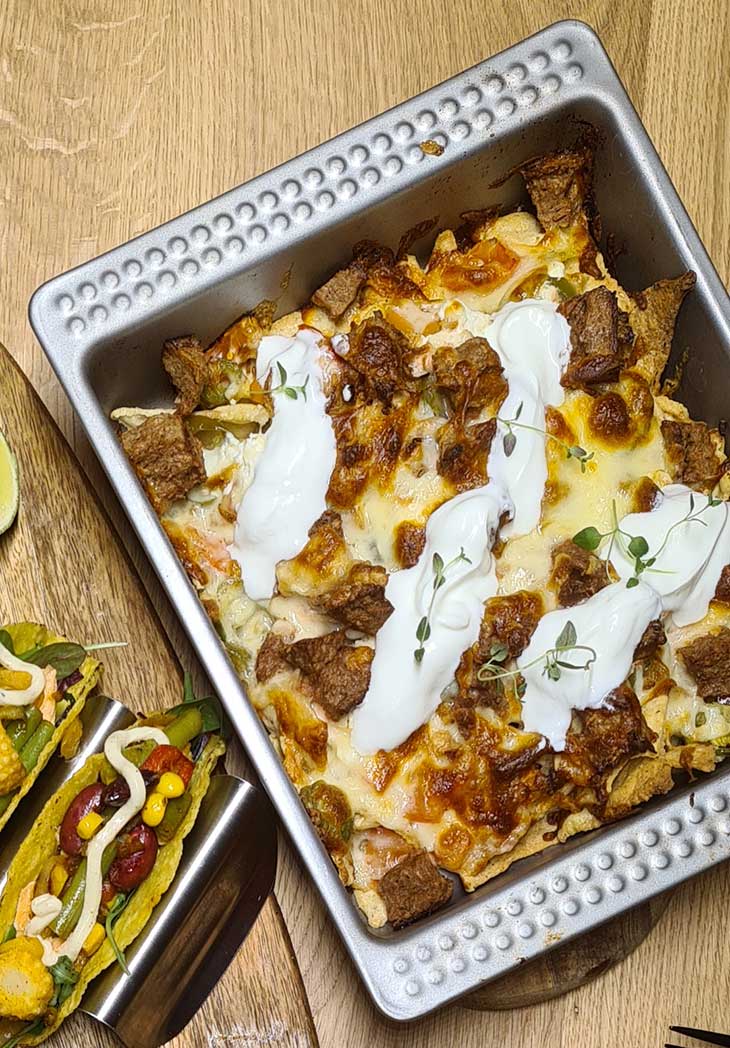 For the sour cream topping, I recommend using my recipe for homemade vegan sour cream with probiotics – or you can use store-bought veggie sour cream. Alternatively, if you don’t want this recipe to be vegan, I whole-heartedly recommend some buffalo yogurt.

I chose to pair these vegan loaded nachos with some hard shell veggie tacos – you can find the recipe here. They’re full of healthy veggies and yummy spices. They’re crunchy, delicious and so easy to make, I really recommend this combo. If you have the time, I recommend making some guacamole on the side. We didn’t so we just had the nachos and tacos, but we found them to be just enough for two people.

You might see in the pictures that we spoiled ourselves with some drinks as well during our Mexican-themed dinner. I have a fully stocked bar at home, so lately I started pairing my dishes with different alcoholic drinks and cocktails. For this one, I’ve made two cocktails, both with vodka as a base. One of them has Absolut Peach vodka and peach tea and the other one has Absolut Mango vodka combined with pineapple juice. They were amazing! Totally recommended! If you’re interested in me sharing more drink and cocktail recipes with you, do tell, I can’t wait to do so! 🙂 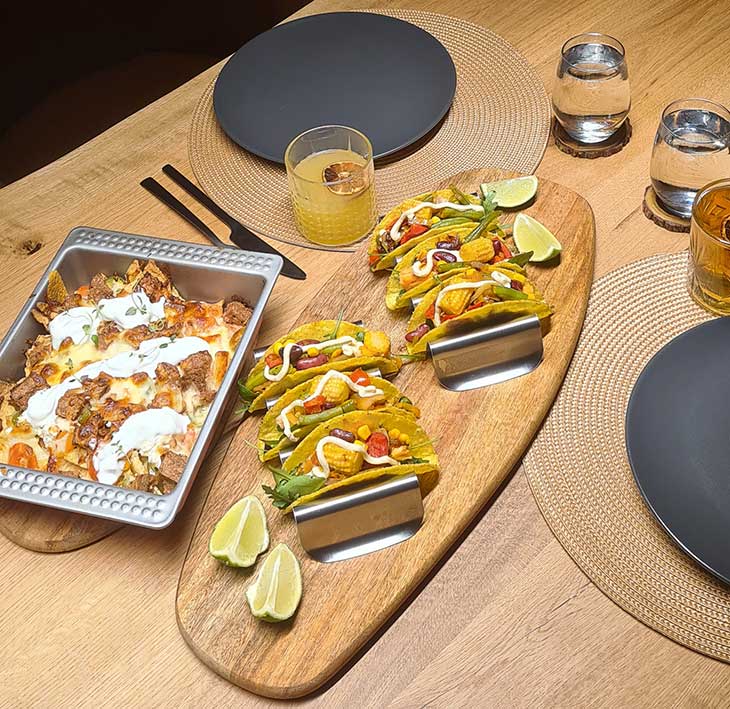 TIP: If you don’t have enough time to prepare this entire set for the vegan loaded nachos, you can serve them simple, with some vegan cream cheese such as this homemade one. Maybe during a movie night, why not? I oftentimes prefer nachos over popcorn, they’re so good and crunchy!

And if you love Mexican cuisine as much as I do, I have some other yummy recipes for you on the blog such as these ground soy quesadillas, this Mexican zucchini soup, or this Mexican quinoa. All vegan, easy, and super delicious!

That being said, I hope I convinced you to try preparing your own Mexican-themed dinner tonight. Or just these loaded vegan nachos, they’re surely good enough. If you decide to do so, don’t forget to let me know how it went. I love hearing from you!

Easy, quick, and yummy. Exactly what I was looking for.